She Plays, He Plays: We’re A Little Tied Up At The Moment 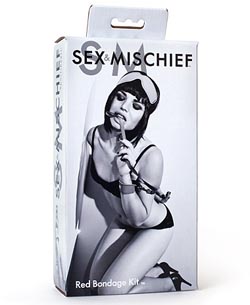 This month, we sent Rydell and Susan not one, but FIVE Sex & Mischief Kits from Sportsheets to try. They've turned their bedroom into a bondage playroom, purely for educational purposes of course... they haven't been enjoying themselves at all...
Susan and I have been married almost 15 years now and previous to these last few weeks, I could count the number of times we’ve “restrained” each other on one hand. We certainly don’t have any philosophical misgivings about it. We’ve just never gotten into the bondage scene. I guess we’re like Sharon Stone’s Catherine Tramell from Basic Instinct when she’s telling the wide-eyed detectives that she prefers certain lovers to able to use their hands and fingers.

All that said, we’ve sure been fuckin’ missing out.

And thanks to the Sex & Mischief (S&M … clever, right?) line of bondage kits, our marital bedroom has been transformed into a tantalizing dungeon of bliss, complete with playful pitfalls at every turn. The entrance to the master bath is outfitted with Door Play Cuffs, a set of Adjustable Rope Restraints dangles over the arm of the paisley lounge chair, and the Bed Bondage Restraint Kit can be deployed from our otherwise unassuming queen-size sleeping arrangements at any moment.

In other words, we’ve got the gear, now we’re working on experience points. Here’s what we’ve discovered so far about five of S&M’s sexiest products, in descending order to our absolute favorite.

5. The S&M Bondage Kit includes a blindfold, leash, and two wrist cuffs (that can snap together to become a collar, though even at its largest, it didn’t fit around my neck). The blindfold is fantastic; its soft underside is comfortable and it has an elastic strap that fits everybody. The wrist cuffs snap close, which creates a little extra hassle, but adds a bit of allure, too. As for the leash and converted collar, “I don’t find that terribly sexy,” Susan admits. “But if that’s something you’re interested in, this would be a good starter kit.”

4. The S&M Door Play Cuffs are unadulterated dirty fun! Slip the nylon strap over the door as you close it and voilà, you’ve got yourself wall-mounted restraints. Standing there, with my hands secured by the Velcro cuffs above my head, I really did feel vulnerable and helpless as Susan gyrated and teased her way closer and closer until she made contact. “That was so much fun,” she says. “I stripped him completely naked. He could only move his hands a few inches in any direction so he had to just stand there and watch me dance and touch myself – and sometimes just barely graze his cock. Even though I ended it with a nice blowjob, I had so much power.”

3. Honestly, I’ve always thought handcuffs were uncomfortable and a pain in the ass. S&M’s Adjustable Handcuffs, however, are simple to use, soft, and fasten with Velcro, so they don’t hurt your wrists or interrupt playtime with any silly keys or latches. Plus, the strap length is adjustable, which creates more options than traditional restraining devices.

“Rydell cuffed my hands around one of the panels in our headboard,” Susan says. “That wouldn’t work with the short chain on regular cuffs. This way, my hands were actually immobilized. I could playfully twist around while Rydell was pinching my nipples or tickling my legs, but I couldn’t fully avoid his naughty advances!”

Eventually, I decided it was time to advance the naughtiness so I set Susan free with the easy-release clip on the strap – one pinch with a thumb and forefinger and your captive is on the loose. That’s my favorite feature of the S&M Handcuffs because after a while, I wanted Susan’s hands all over me, and not having to disrupt the goings on to un-Velcro anything worked great.

2. There are two things that we really liked about the Adjustable Rope Restraints. First, the rope is soft so there was never any concern about burns. Second, you don’t have to know anything about knots. Each loop (there are four) is equipped with a slide-tie: insert wrist or ankle or finger or whatever you’d like and pull tight. Tying up your lover couldn’t be simpler. “The pre-made loops and everything might make the bondage aspect of it seem a little ‘mainstream,’” Susan says. “But that made it easier for newbies like us to experiment.”

1. If you’re only going to buy one S&M product, make it the Bed Bondage Restraint Kit. “Oh, my god,” Susan says. “It’s like the Adjustable Handcuffs on steroids.” Indeed, but instead of just the handcuffs, there are four soft, Velcro shackles – for wrists and ankles – on long, individual cords that are all connected to a central strap that you position beneath your mattress. In the end, you’ve got one restraint at each corner of your bed. I set it up while Susan was running errands.

“I came home and Rydell called me upstairs,” she says. “We were kissing and undressing and then he pulled the wrist cuffs out from under the mattress.”

After I secured her wrists, I made my way down her right leg. “I couldn’t tell what he was doing at first, but then I felt him put the cuff around my ankle and I was thinking, ‘holy shit, you’ve got to be kidding me.’

“All of a sudden I’m laying there totally naked and tied down in a spread eagle. I had to laugh at first, but it was so fucking hot. All sorts of fantasies were racing through my mind and Rydell just kept playing with me and talking dirty. I felt like I was at my orgasm threshold the entire time.”

I wanted to see the fantasy through to completion so I raised Susan’s hips a little and slid inside while her wrists and ankles remained shackled. “That did it,” Susan says. “I was pulling against all four of the restraints and Rydell was taking me. Literally. Obviously I wanted him to, but the idea that I couldn’t stop him … I don’t know what else to say except that I started coming instantly.”
Tags:
Views: 2645
Related articles