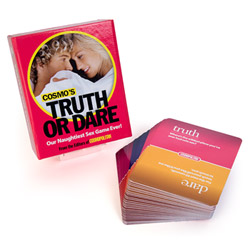 Other Cosmo's truth or dare reviews

For $9.95 you can't beat this game. Some of the questions are a little lame, but that can be fun, too and make for some great laughs. One of the things my wife likes about me is that I'm always trying to make her laugh. This game helped me to do just that. I was hoping for a little more kink, but found that it wasn't necessary for us to thoroughly enjoy this game.
Pros:
Inexpensive, Simple, and fun.
Cons:
Might get boring and repetitive after a few games.
Rating by reviewer:
4
extremely useful review

Cosmo's Truth or Dare is a game that for new couples can be a great way to learn more about each other in a fun, somewhat adventurous way, but nothing too extreme. For couples who have been together a while, it can be used to spice things back up a bit, have some laughs and remember when things were new and, oh so, exciting. My wife and I fall into the latter category and we really enjoyed the game.

The questions and dares are tame enough that there isn't much chance of your new partner being offended or scared off, but at the same time could lead to a night of great sex, which was the case for us.

The game is very simple. There are instructions on the back flap of the box, but I doubt you'll need them. Each card contains a "Truth" and a "Dare". One partner picks a card and the other chooses either "Truth" or "Dare", and then has to either do the dare or answer whatever the truth question is. Then the roles are reversed and so on. One could easily make up different rules to suit themselves or if they wanted to make the game a little more steamy or kinky.

In our games, we made up a rule that if the reader of the card already knew the answer to the "Truth" question about the other player, the reader would have to say the answer and the other player would be forced to take the dare. Some of the dares might not be doable (like taking off all your clothes and walking to the mailbox and back) if you have kids in the house or are otherwise limited. If that's the case, you could pick something else for your partner to do.

The cards are constructed with a sturdy, high quality paper, and have a shiny coating on them like regular playing cards, so the cards should hold up over time.

The storage box for the cards is pretty slick in that it has an attached, folding lid with a little magnet in the lid flap that keeps the lid closed. The box is compact and can easily be stored in a drawer or on a cupboard shelf.

Both my wife and I have been really stressed with work and some financial issues over the past year or so and our sex life has taken a back seat to more pressing concerns. When I saw this game, I thought it might be worth a try to get us back into the swing of things. I am happy to report that thus far it has worked.

My wife seemed none too interested in playing, but I coaxed her into it on a Saturday night that we had nothing to do. Two hours and 4 orgasms later (Her! I got one.), she was glad we played. We played again 2 nights later with the similar results.

Some of the questions and dares seemed a little silly, but that got us both laughing and really lightened the mood. We knew a lot of the answers to the questions about one another, but that really didn't detract from the game at all. It actually had us reminiscing about when we were first dating, which is a good thing.

We've played the game twice and haven't gotten through the entire 120 card deck yet. We will probably get a third game out of it before we get to the previously used cards.
Follow-up commentary   I still like it 3 months after original review
We've played Truth or Dare a few more times since my initial review, but it hasn't come out of the drawer lately. The questions and dares have become familiar to us, which makes it less fun.

Given the price and the fun we had with the game, I still call it a great bargain. As a big bonus, the game got my wife and I laughing and communicating again in the bedroom, which is priceless.
This content is the opinion of the submitting contributor and is not endorsed by EdenFantasys.com