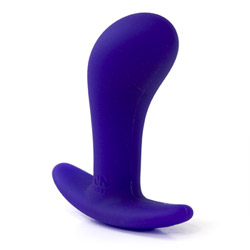 Bootie: fun for your booty!

Due to its small length and large base, it's quite comfortable for prolonged use - I've worn it to work and even slept in it. After a while you forget it's there - which can be either good or bad, depending on your purposes. I find some rocking or clenching helps remind you.

I LOOOVED the design! It slipped right in, but the nice curve ensured sensation, though I'm still not sure which way the curve should go. I would imagine for those with the right anatomy there's a particular direction for the P-spot to be stimulated, but i just switched it up - occasionally while I was wearing it, which was fun.

I loved using the Bootie! As a total beginner, I was glad that its size was not at all intimidating, and the large base made me feel very secure in that it had zero chance of getting lost.

Again, there is a bit of an odor that is retained, but it's really only noticeable if you're looking for it.