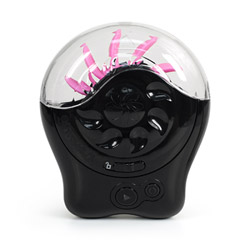 Power clit-licker? How could this not be a great thing!?!

Perhaps the Sqweel 3 will be the perfect blend of incredible power and speed. For now, I won't be using it much. It just doesn't feel very nice having pieces of silicone whipping at your clit.
Pros:
Great concept
Cons:
Way too fast to be enjoyable
Rating by reviewer:
2
useful review
For years, I've been slightly envious of the design and awe of the Fleshlight and automatic pumps that men have (though I've been informed that they're far from perfect). So when I came upon the Sqweel 2, I thought to myself "how could this NOT be the perfect toy?" I mean, I love having my pussy tended to, and fortunately I have a better half that is all too willing to oblige (and do a fantastic job while down there). But we were both excited about the idea of a power toy that would do just that job, leaving us both to focus on other areas of each other. We are, after all, about maximizing the amount of pleasure possible, especially in one session.

The Sqweel 2 is actually a very cool design. I got the black (white just seemed less fun), which comes with a nice cover that stays securely fastened to the unit when it's not in use, protecting the flexible wheel of "tongues" and keeping the interior of the toy clean. When designed, usage and cleaning were well thought through, and the spinning wheel is easily removed thanks to a removable side panel that holds it in place. Simply slide the locking tab (there's a lock and unlock icon to help you decide which way it should be going) and the panel slide right off. Then the wheel comes out for cleaning. I did notice that you should probably be a little careful cleaning the rest of the toy (the part with the buttons, batteries, and motor) since it's likely not all that waterproof. So don't just disassemble and toss in the dishwasher. 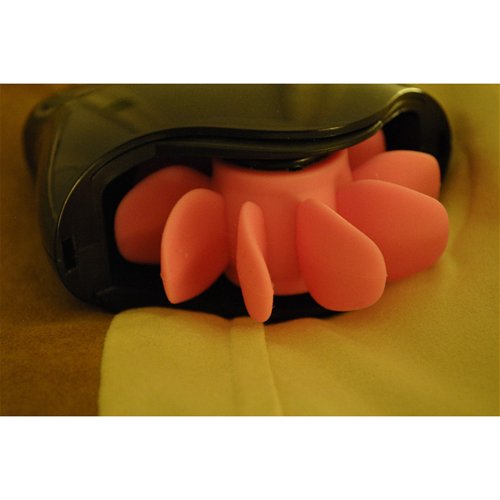 So how does it perform? I've posted two videos we took that show the various operations of the Sqweel 2. First, when you power it on, it starts in the basic forward motion at the lowest of the three speeds. Pressing the power button again and again will cycle through each of those three speeds. The only other button, labeled with two arrows spinning around, is to reverse direction. So press it once and it does just that. But press it again, and now the Sqweel 2 will cycle between forward and then backward motion, each for about one second. An additional press takes it back to the forward direction again. The lowest speed is actually fairly fast, and unless you enjoy a 10,000 RPM clit licking...well, in all our testing we always reverted back to the slowest speed. My biggest problem is that even at the slowest speed it was still far too fast to really enjoy. When I pressed it myself with just enough pressure to feel the flicking action, it quickly became uncomfortable. When I really added some pressure, the tongue action would start slowing down, but only because it was actually stopping due to a lack of power. This became incredibly frustrating after a few minutes. We ended up giving up completely, then trying again another night only to experience the same issues. I will note that we also tried it dry (not the way to use it), using natural lubrication and saliva (he prepped me for the experience the second time), and even with a ridiculous amount of water based lube. None really improved the overall situation.
Follow-up commentary   I've started to like it more 1 month after original review
Now that we've swapped out the original wheel with the Sqweeler (see my other review), I find the Sqweel 2 to be a much better toy! I wish the original came with the Sqweeler, but that's the way it goes.
This product was provided at a discounted price in exchange for an unbiased review. This review is in compliance with the FTC guidelines.