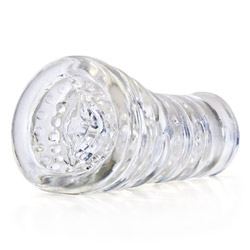 If your looking for a cheap once in a while thrill go for it, it has it's merit and I think it overall is better than it's shortcomings.
Pros:
Cost. Good suction. Good Sensation.
Cons:
Early Smell. Not Durable. Difficult cleaning.
Rating by reviewer:
3
useful review
This is a nice toy for the money, but it has some drawbacks.

First off, it’s cheap it’s a sleeve, smells bad the first few times it’s used, and as I’ve said before you get what you pay for.

That said I am not knocking the ability of the product. It has several nubs and chambers along the length of the inside that proved to create great sensations and some noticeable suction on the return stroke. I found if you compress the air out of it the suction is absolutely amazing especially as you get to end of the return stroke this is aided by the fact that it has a closed end but well get to that. Its small in overall size and very squishy but it does pickup dust dirt lint and hair as it gets tacky after cleaning so store it in a baggy to keep it clean.

On the down turn it has a very low durability rating in my book. A little rough is a little too rough. You don’t need to baby it but you cant go for broke very often with it either. I got about 4 weeks out of it with regular use not every day but often. There is a downside to the closed end I mentioned cleaning. With no clear pass through its like rinsing a cup, made of jelly, with more nooks and crannies than any English muffin you’ve seen. While it may seem like a great idea to turn it inside out for cleaning this only makes the fragility that much worse, as it stretches and strains the small cracks and tears. I also found it to be a bit short in stature for me but the stretch accommodated me overall. You’re not going to get a deep throat effect from it but it does its job. All in all it is marketed as a novelty and while I would say it’s a bit more that is a fairly fitting term.

Would I buy another? Actually for a cost factor I would say yes knowing I need to be more gentle with the next one, and hey where are you gonna go get a months worth of decent head for under $20???
Follow-up commentary   I don't like it anymore 2 months after original review
Trashed after catastrophic failure. Not durable. This is a novelty more than anything else. It feels good but if you like a bit more go to a silicone sleeve or Fleshlight, you'll be glad you did.
This content is the opinion of the submitting contributor and is not endorsed by EdenFantasys.com