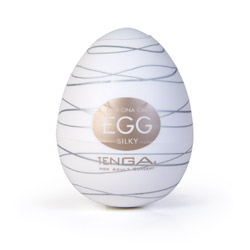 Whether you're looking for something to hold you over while you're out of town without any extra bulk, or you want to have a naughty Easter egg hunt, these adorable little eggs are a great choice. If you're gentle enough, you can even get multiple uses out of a single one!
Pros:
Feels great, Discreet, Easy to store (before or after use)
Cons:
One time use for larger guys
Rating by reviewer:
4
extremely useful review

If you're looking for a one night stand in a shell (literally), something quick and on the go, a last minute present, or even something to tuck into a stocking during the holidays, the Tenga Egg is a good call. If you're not on the larger side, you can get multiple uses out of it, and if you are on the larger side, make the most out of destroying it with your pleasure.

The Tenga Egg is made from a really soft, squishy, stretchy silicone. It does have a bit of a smell to it, but it's only noticeable if you're darn near trying to snort the thing, and neither of us noticed it at all while in use.

The outside of the egg has more of a matte finish to it, while the inside features one of 6 textures. Ours is "silky" and features a neat intricate web of rings that criss cross and go all around the inside. He described it as being the male version of the "ribbed for her pleasure" condoms, and I just think it looks awesomely art nuoveau.

Here's a better look at the inside of ours:

It is indeed egg shaped, but I'm sure we're all aware of that by now. There's a hole in the wide part of the bottom that you would pour your lube into and then follow that up with your penis. It will definitely stretch to accommodate a wide variety of sizes, but the larger you are, the more likely you are to accidentally destroy it before finishing with it.

Since the egg fits nicely back into its shell that very closely resembles a plastic Easter egg (extra storage idea if you somehow manage to lose the shell while going at it?), and after you peel the wrapping off it's a plain white, nobody's really gonna know what this is. Even if you leave the hunk of silicone out to dry, it's not immediately obvious as to what it is, so if you're a quick thinker and get caught with it out, you can easily cover. Since the whole setup is so small, it's really easy to travel with.

Right out of the package, the egg looks a little like it's not gonna cut it for anything more than some head stimulation, but the super stretchy silicone proved us wrong. He was easily able to get it down his entire length without much trouble at all, although he's a bit on the smaller side of average.

To him, the lube felt thick and velvety, not runny at all, and still needed to be cleaned off when he was done. He could feel that there was texture inside the egg, but he couldn't feel it in detail, at least when using the thicker lube provided by Tenga. With the water based lube he used afterwards, it was a little easier to feel the texture but the egg to him didn't feel quite as good. It still felt "awesome," but felt better with the originally provided lube.

He skipped the lube applicator and just poured the lube straight into the egg itself. A quick swirl between your hands like you're making a long string of cookie dough gets the inside evenly lubed, and if you're worried about spilling lube, start off by keeping the hole upright, and inserting downward, then changing position. He had no problems with the provided lube getting sticky or anything like that. He's also successfully used a water based lube, as well as hair conditioner while in the shower.

If you're on the larger side and pop a hole in this, or don't want to reuse it, simply blow your load, lay there twitching for a while, then shove the egg back in the shell, close it up, and toss it out. If you want to try and keep it around for a few more uses, just wash it off in the sink with some warm water and possibly some soap or a toy cleaner, then let air dry if at all possible. Store it back in the egg when dry, and keep that wherever you want.

Adorable. At least to me. He thought it was pretty neat too though. A small egg shell similar to those plastic Easter eggs you might find, with a fun wrapper that tells you which version you have. Inside you have the egg, a lube applicator, and a packet of lube. You can easily give this as a gift as it's not immediately obvious to anybody who doesn't already know what it is.

I'm still not entirely sure what base the lube has. I thought I had read somewhere that it was a silicone base and therefore would degrade the toy if used and so on, but even after using that, we haven't spotted any real degradation that can't be chalked up to the abuse the sleeve has gotten.

I bought this initially as a surprise for my fiance on a weekend away we were taking, but alas, shipping mishap, and it didn't get here in time. So I tried to keep it hidden til the next time we were doing something special, but he found it anyway, and was immediately curious. He loved the idea, but wasn't so thrilled about it being a one time use thing. Then he used it, and realized that he would be able to use it again a few more times.

It was really neat to watch him play with this. When he had it fully stretched out, I could see through it, sort of. I could easily see his skin underneath, but nothing in great detail. It looked like it was getting dangerously thin, but some poking, prodding, and squishing of the end proved that it was all a trick of the eye. Even after 3 uses, ours is still holding up pretty well. I give it another 2 or so at best, since if you pull ours out of the shell, you can see an obvious "flaw" that's been created with the multiple uses at the tip of the egg where it not protrudes due to being stretched out. But it's surprised us so far. I kept reading about the "awesome close up show" that everybody was getting, and was really excited to see it, but it wasn't all that. When he did finish, I could sort of see it leaving his penis, but mostly I saw it gathering in the air pocket that had been created during thrusting.

All in all, we were both really happy with this. I asked him his opinion on everything for how he would rate it, and he gives it a solid 4 1/2 stars. He wishes it were a little more durable, but for a 'one time use' product, it's pretty awesome.
This content is the opinion of the submitting contributor and is not endorsed by EdenFantasys.com