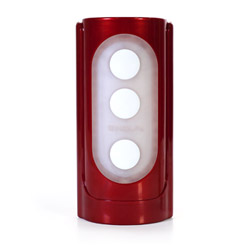 The Tenga Flip Hole Red is like no other masturbator out on the market. It combines thoughtful design, performance and aesthetics into one striking package. It's not without its flaws, but it's definitely one of the best masturbators I've used.
Pros
-Easy to clean and dry

-Variable suction
Cons
-May be too loose for smaller men

-Cap can be tricky to put on
Rating by reviewer:
5
No votes for this review
If you have any prior knowledge of the world of male masturbators then you've likely heard of Tenga. They've earned a reputation for creating inventive quality products that have an eye for both sensible design as well as unique looks. The Tenga Flip Hole Red is one such product, combining thoughtful design in a striking package.

The Flip Hole Red comes in a clear tubular package that showcases the product front and center. Included in the package are the masturbator itself, a small instructions manual and three small "Hole Lotion" tubes that comes in Mild, Wild and Real varieties. Tenga is clearly proud of the product they've made and the case even has a small pedestal built in. It's a nice change of pace from some of the more gaudy masturbators available.

The Flip Hole itself is like no other masturbator you've seen, with a rather discreet red hard plastic shell around a TPR sleeve. The plastic case is split into two pieces; a cap with two prongs like arms extending from it and a cylindrical shell that splits in two and forms the body of the device. The body has cutouts on either side that allow you to grip the TPR sleeve, this serves both an aesthetic and functional purpose as it allows you to squeeze down during use to control the amount of suction involved. The cap is reversible as it can cover the opening when not in use, and hold the shell shut during use. A lot of thought has been put into making this product and it shows in the quality construction. It is however one of the more expensive masturbators out on the market, though it definitely has a premium feel to it.

The masturbator sleeve itself is made from TPR silicon, giving it a soft smooth feel while still maintaining a bit of gift to it. The inside is lined with ridges and grooves. Unlike other masturbators this product is in no way meant to resemble the inside of a real vagina. It's worth noting that each Flip Hole 'color' has a different corresponding sleeve, so a Flip Hole Black will feel different than a Flip Hole Red.

The Flip Hole splits vertically down the center exposing the inside of the sleeve. This is done to allow for easy cleaning after use. Simply open it up and wash the insides out. The prongs on the cap even pull double duty allowing you to rest the Flip Hole on it like a tent, allowing for quick air drying. Cleaning is often a hassle with other masturbators with the cleaning process as an afterthought. It's nice to see a company put so much thought into this when making the Flip Hole, making that its primary selling point.

The Flip is around 6 and one half inches long with a 9 inch circumference. It might not be suited for small hands, but it definitely feels smaller in hand than it sounds on paper. It has around 6 inches of penetrable depth which should be fine for all but the longest of men, and the sleeve is flexible enough to accommodate a wide range of girths.
Experience
To start using the Flip Hole first pull off the cap and open it so the insides of the sleeves are facing up. You're going to want to coat the inside with lube as well as your member.

Upon entry you're going to encounter two small overlapping flaps on the sleeve near the entrance. These are there to prevent fluids from leaking out, though I wouldn't count on them to work all the time. I'm only making note of this because it does provide some initial resistance.

You're also going to want to squeeze down on the exposed sleeve on the shell. This has the benefit of creating multiple points of pressure during use as well as adjusting the amount of suction. When first entering the Flip Hole, you're going to want to press down to minimize resistance as well.

Overall my experience with the Flip Hole was positive, though I do have one gripe. The pronged cap serves as both a lid for the Flip Hole when not in use, and the clap that keeps it together when in use. The prongs slide onto little ridges on the edges of each shell. This can be a slight hassle and it can be hard to properly slide the cap on. It's not a huge issue but isn't something you really want to fiddle with in the moment.

Cleaning however was a snap, simply pop the cap off and flip it open and rinse it under running water. I've found myself using the Flip Hole other products simply because I couldn't be bothered to clean them.

It's also worth noting that the Flip Hole does make some noise during use due to the lube and suction. I wouldn't call it loud, but I wouldn't try and use it with say a sleeping roommate.
This content is the opinion of the submitting contributor and is not endorsed by EdenFantasys.com

Become a Reviewer
My Flip hole tags
About author