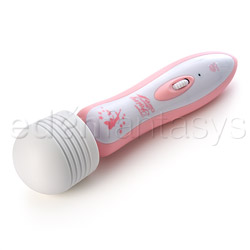 With the power to blend any concoction of meats and veggies in sight... ahem, I mean the power to deep massage any tissue you need it to, the Fairy Wand is a powerful playmate. She's loud as hell, and you may think the chopper is coming to get you. Her rechargeable iPod-like setup is pretty neat though, and I'll keep her on hand for anytime I don't mind my neighbors knowing I'm getting off.
Pros:
Very strong
Rechargeable
Makes great back massager... or chainsaw
No cord
Comes with pouch
Cons:
Loud
Short-circuit over time
Gets dirty easily
Does not hold charge over 20 minutes
Rating by reviewer:
3
extremely useful review

Apparently popular in Asian countries too!

For back massages, deep, mind-blowing clitoral orgasms, and those over the cumbersome Wahl and Hitachi vibrators, there's Fairy. This rechargeable version eliminates the need for an obnoxious cord during play. It's lightweight, compact, and great for travel.

The deep vibrations will knock the socks off of anyone, clit o' steel or no. I do not recommend this for beginners looking for clitoral stimulation. It will make you cry.

For deep tissue massage, this is also a great travel-friendly companion. You can self-medicate your shoulders, neck, back and thighs with the slide of the dial. This is really a pretty great wand.

The body of the Fairy is a hard plastic, that makes for easy cleanup. It is a light pink that reminds me of a grandma. Not-so-cute. The included pouch is a soft cotton in the same pukey pink, with a puke-pink drawstring.

The head of the Fairy is a unique form of food-grade plastic. It is flexible and smooth with a matte, velvety finish. The head has a tendency to pick up every bit of lint around it, and develops a film of dirt very easily. Running a finger over it, pressing hard, results in a path of white created over what now is revealed to be grey. Dirty fairy!

The rounded head features 5 ridges around the edge. These can provide a break from the unchanging surface of the tip of the massager. This toy is quick to dull or numb a clit, and it's good to have a moment of rest between sessions, or when you feel yourself being overwhelmed. These ridges provide slight relief from that intensity. Be sure to pay attention to your body during play, and let it tell you what it needs.

The texture adds no stimulation, but with vibrations this intense, you don't really need any.

You can buy different heads though, to attach to your wand. These will increase stimulation and provide a variety of sensations.

You can find some of those attachments below. They are listed for the Fairy Mini massager but will function just fine with this rechargeable version. 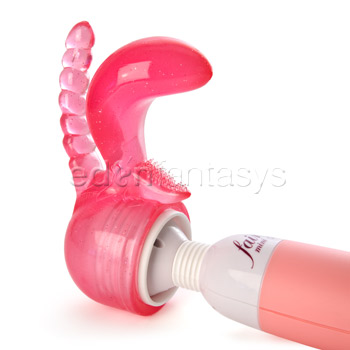 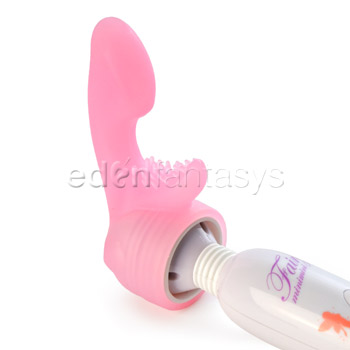 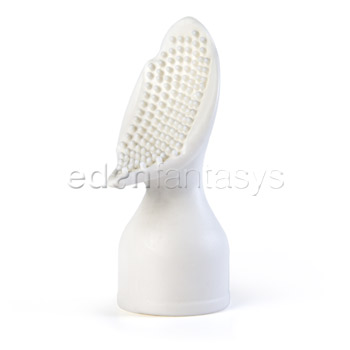 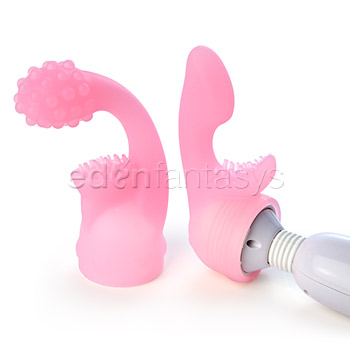 The size is very ergonomic. and the dial is placed in just the right spot. Controlling the intensity of the vibes is easy with a swift movement of the thumb. The vibrating head extends far enough that you don't have to do much reaching while lying down to stimulate the clitoris.

The toy can certainly be discreet when seen lying around. It can always be passed off as a back massager, which it definitely can be used for. In fact, I recommend it. As far as discretion goes in sound... this thing could not possibly be louder. If your neighbors hear you moaning, they'll hear this too. Possibly this will even drown out your moaning. Your bedtime activities will be secret no more.

I love how freaking strong this fairy is! Who ever knew a strong fairy? It's called a fairy, but it behaves like a bull, or some other wild animal. It's loud and it bucks and it blows your house down. The vibrations are deep, rumbly, and carry throughout the body to the knees. I simply cannot stand and play with this simultaneously. It makes me weak!

I received this toy used, and it was several months old when I got it. When I first turned it on, I thought it was broken. The light came on, and it made nothing other than a high-pitched squeal. It was almost ear-piercing. Like a dog whistle. I turned the dial higher. The pitch changed, lower now. The dial turned higher still, and finally the toy jumped to life.

Now, this massager came to me with a bit of charge left in it, and I've found it does not perform so oddly when fully charged. Still, in this state, it not only made dog whistles when first turned on, but seemed to have a short.

The vibrations would on occasion stutter, and the device would make a horrible grinding noise. It had no pattern, but was irregular, and reminiscent of a short in the system.

The scrolling dial provides vibrations from low to super-high. The difference in vibrations is easily felt as you turn the dial. If you press this down on your clit in any angle other than straight on, with the head flush against the skin, it has a tendency to make even stranger noises, and sometimes turn off. When wedged between my boy and I, it turned off completely. And while the head is flexible and does bend side-to-side, the shut-off feature to me seems a flaw.

I was disappointed as well in the short amount of time it took to drain the battery off the plug. Unplugged and fully charged, it stopped in the middle of a sexy session. And we don't even take very long to do it! I'd say about 20-25 minutes in, the Fairy crapped out on me. I'd have to play with it plugged in to continue getting off. So what's the point of having it be rechargeable, with no attached cord? Quick solo sessions? Sigh. Nothing's perfect.

Silicone or waterbased lubes are no problem here. You can use your favorite toy of either kind.

A wipedown with an antibacterial or toy wipe after use is necessary. You can use a toothbrush to rid the ridges on the side of the head of debris. And trust me, they'll collect there.

The carrying-pouch can be thrown in the washer, then the dryer, no problem. Silicone or waterbased lubes are no problem here.

I received this second hand, so I didn't get to see the original packaging. Word on the street though is that it's minimal, and includes no such thing as an instruction manual. The box does state that the device is protected against overcharging, and suggests a full charge of 5-6 hours.

I'm purchasing a Wahl to see how it compares. My Hitachi was a clubbing nightmare. It was strong as shit, sure. But for anything other than solo sessions, it was impossible. It was so heavy, really TOO powerful, even for me, which is a feat and a half. The Hitachi turned into a joke for my boyfriend. He'd say, 'don't you think it should be a little more powerful?' And we'd just laugh.

The cord to this is really pretty neat. A small rubber piece sits perfectly in the USB-like port on the wand. Remove it, and you find the hole for your peg. The cord features a plug similar to that on an iPod, and it slides right in. The AC adapter-end is moveable, and pretty fancy. It's like a high-tech device. Wahl and Hitachi ain't got nothin' on this 21st-century baby.

Magic Wand Original
$55.07
Follow-up commentary   I still don't like it 3 months after original review
I have to stray from rechargeable toys anymore. Those that I've used that don't take regular batteries have come up with electrical problems within a few months. This is no exception. It buzzes and whirs and sounds like it's going to blow. It doesn't stay charged. I really think there's something wrong with it, and am surprised when it continues to boot up when turned on.
Still, I really liked how powerful this was in such a small package. Maybe a non-rechargeable Fairy wand would be more my style.
This content is the opinion of the submitting contributor and is not endorsed by EdenFantasys.com