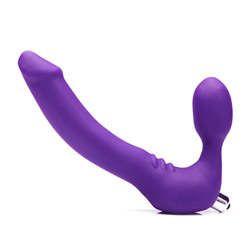 I was totally shocked at how big this thing was when I got it in the mail. I was hesitant to even have the toy used on me non-anally because of the girth, and I advised my partner that we may want to order something smaller and work our way up to this bad boy. He decided against that however, so armed with lots of lube we embarked on what is to say... the least memorable night.

Another downside to this toy was the vibrating bullet. While the vibrations were ok while wearing it, they weren't strong enough to provide any real pleasure. Also, getting the bullet out to clean the toy was nearly impossible. The material created some sort of a "vacuum" effect. We solved this problem by putting a drop of lube in the hole before inserting it.