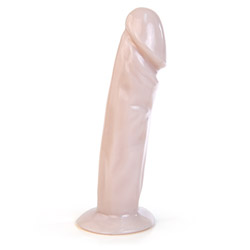 The Vamp is made from safe material, is large and will fill you up, and shimmers gently in the light. It's also great for role play, for those who may be vampire fans. For the size, as well as being made of silicone, the Vamp is a great buy for the price.
Pros
It's huge!, it's pretty, it's silicone, and it fills you up.
Cons
It's huge! This can be a problem for some. Not much suction on the base.
Rating by reviewer:
5
useful review

This is a near perfect toy. If it had the slightest of curves it would have been great for g-spot stimulation. It's flexible but it doesn't quite curve to hit that area for me like some other toys. It's realistically shaped and is smooth going in and out, except for the bump of the head. It is too large for me for vaginal use, but I'm not going to knock the product for my vagina being shallow! I use it anally instead, and it is lovely for that. It's not discreet at all. It's large and shaped like a penis, so there isn't much hiding it.

The base has mild suction ability, but it will not hold up for thrusting of any sort. The base is good for holding on to, though, or pressing up against the wall to help ease yourself onto it. A suction cup base would have also helped make the toy better. I think it's harness compatible, but I mostly just use it manually. I think it would have been nice if it came a size smaller, but it can still be used if you are careful or don't like long toys.

I store all my toys in a metal chest nearby my bed. The material the Vamp is made of attracts dust and fuzzies, so the best place to play would probably be in the shower, where it can be easily washed after use as well. The Vamp is made of silicone, so silicone based lubes are no go. It's easy to take care of as long as you watch out for the lint.

I can't stress enough that this thing is HUGE. It's too long for me to use vaginally, so if you have a shallow vagina, this might not be for you. It's still a lovely toy though. If you want the sensation of being filled, either vaginally or anally, it may be worth a shot.