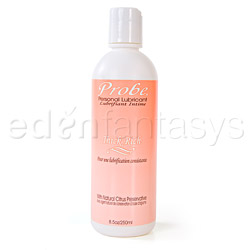 Other Probe Thick and rich reviews

Probe Thick and Rich is unflavored and has no discernible smell, a plus for those who find flavored and scented lubes too cheesy. But since everything has at least some taste, I'd describe Probe as slightly citrusy, and not at all unpleasant.

Probe is a more than adequate lube in every department. As mentioned above, it held up perfectly during intercourse. We needed no extra applications, and it needed no thorough clean-up or washing.

As for its packaging, Probe is functional and informative. There is no plastic or fancy space-age box to create unnecessary waste, and the label on the back describes Probe's uses, features, and ingredients.

On top of Probe's already excellent performance rating, it is also a perfect choice for those who are as concerned with health as they are with effectiveness. Thick and Rich is made of all natural ingredients such as vegetable glycerin and grapefruit extract. It is also paraben free and hypoallergenic.
Follow-up commentary   I still like it 2 months after original review
After a brief stint without Probe and trying out some other half-decent lubes, I've finally re-acquired this amazing concoction. I'm still amazed at its thickness and staying power, not to mention just how unoffensive it is to smell and feel (and I suppose to taste). This is still, without a doubt, the best lube I've tried for anal.
This content is the opinion of the submitting contributor and is not endorsed by EdenFantasys.com