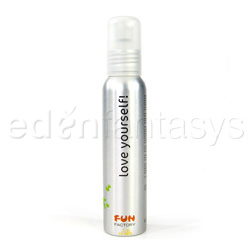 The testing process was as fun, as it should be. It's described as toy fluid but obviously there's no reason you can't use this lube on its own. It's condom friendly too, a definite point in its favor. The last thing you need to be worrying about during sex is whether the condom has split!

The main things I look out for with lubricants are the smell, texture, and taste. I know this lube isn't intended for ingestion or to be used during oral sex, but as you know sometimes in the heat of the moment these things can happen. I'm happy to report that it doesn't taste of anything, and even more importantly, doesn't smell of anything. There's nothing worse than having some sexual fun and there being unpleasant smells wafting around.

Well-deserved top marks for this one.
This product was provided free of charge to the reviewer. This review is in compliance with the FTC guidelines.