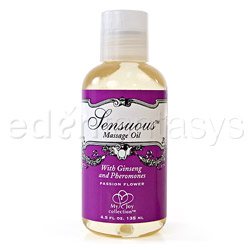 This product is very aptly named, it does smell sensuous and the feeling of smoothing it onto my lover's skin was also very sensuous! Well worth the very small price!
Pros:
Price is definitely right. Very surprisingly nice fragrance, massages easily into the skin.
Cons:
The pheromones cannot be detected by everyone.
Rating by reviewer:
5
extremely useful review
This oil is very aptly named. To be honest I didn't hold out much hope for this being a really eye opening find despite the glowing comment it received from another customer. I was looking for a cheap massage oil I could use for sort of everyday massages as my husband works a very physically demanding job and loves to come home to a soothing rub down. I am also going to be taking a course in healing massage therapy and was advised to find a low cost oil that my "practice dummies" (grin) liked. Since this product did get a good review and the price is admittedly very low I though what the heck let's give it a try.

I have tried perfumes and bath oils etcetera that supposedly contain "pheromones" and I had not found one that actually caused the effect of making the heart speed up or the tummy tightening response advertised. So when I popped open the seal on the bottle I had my husband smell it first. He was impressed by the lovely fragrance but beyond that it did nothing for him. I was a but non plussed but when I took a sniff of my own I was hit with a big shock! My tummy tightened and nipples swelled immediately! Apparently this oil contains the pheromone that I am attracted to! It was a wonderful surprise and finally I knew what all the hype was about.

The oil is rather easily absorbed into the skin making me need to use a bit more than usual to obtain a nice slick surface for the repetitive motions of massage but it's not a significant amount more than I am used to. Even though it doesn't leave a slick surface the oil does make the massage strokes flow nicely and leaves the skin moisturized rather than oily. The oil does not cause my very sensitive skin to be irritated and doesn't cause breakouts on my face. The fragrance is unusual and smells sort of like cinnamon rolls in the jar and has a similar fragrance to high end tanning oils when rubbed into the skin. It doesn't contain coconut oil so it doesn't leave you smelling like sunscreen rather the scent is lighter and much more pleasant.

The bottle is a hefty 4.5 fl. oz. and for $6.00 that is a steal for the quality product you receive. Definitely a pleasant bargain!
Follow-up commentary   I still like it 17 months after original review
The packaging has changed on this product. The bottle is taller and more slender, not a deal breaker just worth mentioning! The guys and I love this oil as both a massage oil and a bath oil. It's light and doesn't coat the tub in a nasty sticky film like other oils. It leaves a barely there scent on the skin and moisturizes without irritating sensitive tissues. Such a steal for $6!
This content is the opinion of the submitting contributor and is not endorsed by EdenFantasys.com