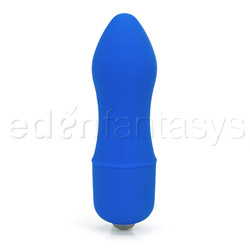 A Good Thing in a Tiny Package

For a first-timer in using bullets, this one does its job extremely well. I was blown away by the intensity of the vibrations such a little toy can provide. It's a fantastic starter bullet, and I would definitely recommend it for anyone looking to add a little spice to their bedroom fun. Just watch out for those batteries.
Pros
Perfect shape and size, adorable, powerful, quiet, variety of colors, five different functions
Cons
Watch batteries, batteries are a pain to put in sometimes
Rating by reviewer:
4
extremely useful review
I hope this bullet doesn't ruin the rest of them for me. This was our first real foray into using a bullet vibrator, and I made sure to pick one that wasn't too expensive, but would hopefully get the job done. This fit the bill perfectly. At only 2 and a half inches long, it's easy to hold, but I wouldn't suggest inserting it anywhere. What it lacks in length, it makes up for with its powerful vibrations.

When I first got it, it was smaller than I thought. Not that I minded. It's easy enough to fit into a purse if you want to take it somewhere. When you first open the packaging, the bullet sits inside of a small black box, and underneath are six watch batteries. The bullet itself was blue, smaller in length than a tube of lipstick. It's supposedly made of plastic, but to me it feels smooth and silky, like silicone. The shape to me is just perfect. To be honest, I think it looks like an over-sized peanut, although it's a bit more flat where the power button is. It barely weighs anything, so there's no way to get tired when using it.

When you get to using it, the batteries can cause a bit of a problem. It takes three watch batteries, and they’re small, and if you don't keep them in the little package they come in you'll definitely lose them. When I went to put them in, I somehow got the first one turned sideways, and it took over five minutes, with the help of a large needle, to try and get it out. The best way I've figured out how to get them in is to balance the battery on the tip of your finger and bring the bullet down over it. Then slowly flip it over, keeping your finger in place until you feel and hear the battery drop down inside. You can do that for the first two batteries, and then it's pretty easy after that to just drop the last one inside.

Now on to the fun part. When I use it, I usually only use the second setting? Why do I do that? Because I like the powerful, consistent vibrations on this one setting. If you like more of a variety, there are five. The first setting is a simple strong vibration. The second is the same thing, just stronger. The third and the fourth are both fast pulsing vibrations, the fourth one stronger. The fifth setting is one short pulse, followed by a longer one. The little push button on the end of the bullet makes it easy to flip between each setting while you're in the middle of using it.

The shape of this little thing made it a piece of cake to use. The pointed head was the perfect shape for my clit. As someone who has more orgasms from clitoral stimulation, this little bullet really helps me get off in the middle of sex, or during those times alone, which I have had quite a few of since we got this little toy.
This content is the opinion of the submitting contributor and is not endorsed by EdenFantasys.com