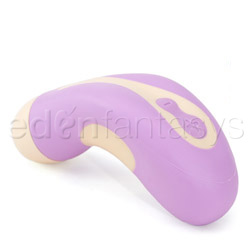 A mans take on giving.

If your looking for a great Valentines gift for someone special (or any occasion for that matter) then gentlemen take heed. This product delivers the goods in spades. It melts hearts and wets sheets, while bringing a smile to all.
Pros:
Great stimulation and ergonomic shape. Just the right amount of vibe, and a nice material.
Cons:
Buttons can be tricky to use, led light was pointless and just drains the battery.
Rating by reviewer:
5
extremely useful review
To start off, I must say this is likely to be the first male review of the LAYAspot (if I’m wrong feel free to correct me). This is possibly one of the most reviewed toys on the site. As a male, perhaps I can lend a new perspective.

I purchased the LAYAspot as an early Valentines day gift for my girlfriend. I wanted something that was sexy and bit different from anything else in her collection of toys. She had no designated clitoral stimulator, and after her putting forth a wish list of five items to pick a “surprise” from, I went with the LAYA. I was sold on the ergonomic shape. This was a toy that looks as though it was indeed made for a woman's body. Next the material, Elastomed: Phthalates free and hypoallergenic. It also appears as if this toy has some plastic components such as the battery pack and the core of the toy.

We opened up the LAYA together, first noting its impressive if not excessive packaging. A well designed box with information abound on the back fold out panel. The toy is Vanilla-Candy violet in color by her request. All I could think of was the Venus of Willendorf, the embodiment of femininity. We pulled the toy out and I noticed virtually no smell whatsoever. The LAYA had two textures, a satiny rubbery texture and a hard slick plastic texture, both seem very durable. We glanced at the instruction manual and lube packet, made in Germany, so English was not the first language on the list (we got quite a laugh from me trying to pronounce the German instructions). I would consider this the Audi TT of clit vibes. Neither one of us has tasted this toy, so I cant comment on that aspect. We popped in some batteries and turned it on to hear the vibes. Slightly louder than I expected for 2 AAA’s. Nothing out of control, barely audible under the covers. This toy is quite sensual, not a “dirty” type of toy, one that makes women let out a sigh of delight, exquisite and subtle.

Getting down to the fun stuff. We usually start with some manual clitoral stimulation so this is just where we began with the LAYA. My girlfriend started out with the toy on it’s lowest setting then slowly ramped up through the seven speeds and then the three cycles. She found all of them pleasant but seemed to like the middle speeds the best. It was no slouch in the vibration department. With the pulsating she also liked the middle speed the best.

The curve is one of the best features, it really lets her direct the position one handed with the other hand being free to add other types of stimulation. Next I took the wheel so to speak and enjoyed giving her clit, labia and entire vulva, a good and thorough massage. I did find the buttons a bit awkward to cycle through but this was a very minor issue to me. We never tried the included silicone lube, from the reviews I read the verdict seems to still be out on whether or not it is actually safe to use with this toy (if you know first hand please let me know), We stuck with our trusted Maximus. After a session of penetration I came and then returned to the LAYA. I was able to finish her off quickly with the vibe and it left her shuddering.

Our next round of play started with the LAYA and me reading some erotica, then I got out her favorite G-spot vibe, she was squirming and stuttering in no time at all. Having her control the LAYA and me thrust the G-Vibe led to a deep and intense shuddering orgasm.

This toy is a quick clean up, something I always look for in a toy. A soapy rag with warm water and it’s clean.
Experience
Now as a man who cares about his ladies sexual enjoyment, I’m always up to learning something new about my ladies “pleasure zones”. And the LAYA taught me something new! We had previously used the tip of her other vibes to narrow in on her clit, giving it the most direct attention. With the LAYA we both found out how much fun can be had stimulating a larger area. Another personal favorite for hers was to have me hold the toy still and apply pressure, rather than rotating it around her clit. This worked the best when in pulsing mode.

She said, “I was extremely satisfied with the LAYA. The curved shaped made for the ultimate stimulation of my labia. It was amazing. And teamed with my Water Rose, lets just say I was pleased!”
This product was provided at a discounted price in exchange for an unbiased review. This review is in compliance with the FTC guidelines.