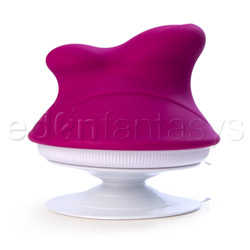 An Interesting Departure from the Traditional

The Cleo is truly an unique bird. I cannot think of a toy with this shape on the market. Cleo provides broad, rumbly vibrations. The learning curve may be too much and frustrating for some.
Pros:
Unique, High quality, Variable pulsation modes and speeds, Waterproof
Cons:
Steep learning curve, Battery powered.
Rating by reviewer:
3
extremely useful review

Cleo can be used just about anywhere, it is waterproof, and has a suction cup. However, it is a bit noisy so it is not best for those who need something whisper quiet. Overall, I would say that Cleo requires a specific type of person to get the most out of the unique shape.

The Cleo is made out of a matte, velvety silicone and hard plastic. The silicone is quite luxurious feeling, much like Lelo's other toys, and the plastic is shiny and does not feel cheap. The silicone, though matte, does not add a significant amount of drag, and is used externally so lube is not needed. There is some added texture in the form of a lip or ridge on the top of the toy, which does not seem to add much to play time. There are no visible seams. The suction cup is made from a rubber, which is porous, but only the silicone part should be in contact with bodily fluids during normal use.

There is not much give to Cleo. The toy is very firm with no bending. I suspect the silicone may be coating plastic.

Cleo is not designed like many other vibrators on the market (the closest similar toy is The Cone). It is truly is unique in shape. As mentioned above, Cleo is shaped similarly to a saddle. There are two raised what I'll call horns (that is what it's called on a saddle right?) on either side. They are asymmetrical, one is raised more than the other and leaves a significant indent that seems to be shaped to cup the vulva with the tip of the horn placed either on the clitoris or with shallow penetration. It is difficult to tell exactly where the motor is, as vibrations are pretty much equal across the surface of the toy, though can be felt where there is closer to pinpoint stimulation, especially with the larger side of the toy.

Cleo is approximately 5 inches in length and quite bulky. The base is bigger than the palm of my hand and is an odd height, I can't think of any items to compare it to, but it is shorter than a pop can.

The battery cap is the base, which screws off and reveals the battery compartment. The Cleo uses 3 AA batteries and has a nice white ribbon that aids in removing the batteries after use. Simply lay the ribbon across the compartment and insert the batteries on top of it. If one does not do this, the ribbon may extend past the base and might compromise the waterproofness of the toy.


The shape is awkward to hold with your hand and is best suited for squatting or sitting positions. The shape is discreet enough to be left out without anyone automatically assuming it is a sex toy, though it probably would not take long to figure out. The shape/size is awkward to fit in toy boxes or my nightstand. The Cleo is suitable for travel as there are two safeguards to prevent turning on inadvertently.

Cleo is controlled by a plus/minus button located on the base of the toy with the smaller indent. It is simple to push the buttons to increase or decrease the strength of the vibrations. To enter the pulsation modes, simply push and hold the plus button for a few seconds. The Cleo includes pulses, rolling vibrations and the "random" mode that my other Lelo toy has. To turn off Cleo, push and hold the minus button. Cleo can also be locked for travel by pushing the plus and minus together. I am not sure why there needs to be a lock feature as one is not supposed to store batteries in this toy and it should be a non-issue for travel, but the controls seem to be the same as the rechargeable Lelo toys, so perhaps that is the reason.

The Cleo is very rumbly and broad in its vibrations. It is not a powerhouse like electric or rechargeable toys and the vibrations feel weaker because they are more diffused. This is a slow and steady wins the race type of toy. It is not in a rush to get you anywhere and is perfect for teasing or those days where one would want to take things slow. Cleo is indeed waterproof and the suction cup sticks well in the bathroom, though it is useful to note that it sticks much better to dry surfaces. When the Cleo is attached to any bathroom fixture in this manner the noise increases! This is one noisy toy for any kind of fun time. It is loud in the bedroom and bathroom.

Cleo is a low maintenance toy. There are not many nooks and crevices to hide little nasties, and since it is waterproof can be cleaned in soap and water without fear of ruining the toy. Antibacterial soap or toy cleaner and water make cleanup easy. Although the toy is silicone, it cannot be boiled due to the plastic and internal motors. It is not compatible with silicone based lubricants and water based lubes are recommended.

Cleo can be stored out in the open or by taking up a lot of space in the toy box. If left out, it does not seem to be a dust magnet, but should be wiped down before use. Condoms would not be useful to those looking to share the Cleo or aid in cleanup due to the awkward shape of the toy.

Cleo comes in a flimsy, yet attractive cardboard box. It is cute enough to be given as a gift and there are no naked people anywhere on the box. There is a window where the toy can be seen. The box is too flimsy to be used for longterm storage. Instructions are included but they do not give many tips on how to use the very unique Cleo.

It took many uses to figure out how to use this toy. I can get off with it if I am patient and the payoff is generally worth it. It was frustrating to figure out positions to use the toy in. It may be too firm for most people to "ride". I personally like the firmness but it is the noise that prevents me from really using it in that position. I have thick thighs with lots of extra padding so I can stand and hold the Cleo right where I want her. This might be painful or not feasible to women with different anatomies than me. I don't use Cleo that much, and the seemingly very narrow range of women this could work for causes me to rate her the way I did. The materials and construction are top notch though.