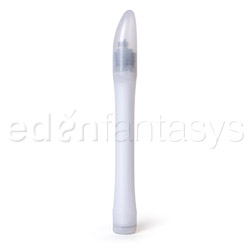 However, if you are willing to never put batteries in and just use it for penetration or anal training, we have a winner! It is so slim and rigid that you can rock the g-spot and p-spot with no discomfort whatsoever. The length of the toy allows for angled thrusting and you can really pinpoint the “right” spot for you. It's a diamond in the rough if you are willing to use a different toy for clitoral stimulation.
Experience
This toy arrived in a clear, unsealed plastic bag. I immediately washed it with warm water and soap. As I was drying it off, I noticed there were shavings or minute splinters of plastic all over the shaft. There was also a very hard plastic point on the very tip where the toy was removed from the mold used to form it.

To counter this problem, I used a dry, woven-plastic dish pad (think Scotch-brite) as an abrasive (also great for pool cues, if you were wondering) to knock off the rough bits and to file down the offending bit of plastic on the tip. Gave it another rinse and we were good to go!