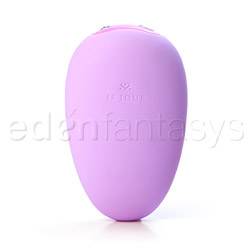 The Je Joue MiMi is one of the better clitoral vibrators out there. It's strong, charges really easily, and is waterproof. However, the buttons really can drive me insane at times even though the strong vibrations do make up for it.
Pros:
STRONG, Body-safe, Rechargeable, Great packaging, One of the better clitoral toys
Cons:
Buttons are hard to push, Can be hard to hold onto
Rating by reviewer:
4
extremely useful review
The JeJoue Mimi is Je Joue's attempt at a (better) clitoral toy that operates on vibrations instead of a moving mechanism (like the Sasi). It comes in a multitude of colors, and it's made from body-safe silicone. The toy has been tested, and it does come out as waterproof, so it can be used for water fun. It is a small clitoral toy that does match the Real-Size widget perfectly. I own the pink one, and it looks more pink (than the purple) shown in the product pictures. The size is small; it resembles a small, smooth rock, and it's a little over three inches long and about two inches wide. Imagine a standard bullet that's slightly longer and more flattened.

The box is really gorgeous. It's a plain black box that ties together with a ribbon. (Like the Gi-Ki and Luxotiq toys do) The box comes in a purple slipcover that protects the box but can be thrown away. The MiMi sits in a tray made for it right inside the box. There's a ribbon that makes removing the tray easy, and underneath the tray is an egg-crate that carries the instruction manual and the charger for the MiMi. The instruction manual isn't very helpful. There's one page in English about the features then two pages about all of the warnings/hazards to avoid electrocution. The G-Ki manual had information about how to best use the G-Ki and everything, and I feel like the MiMi is lacking in any of that helpful information.

The MiMi does charge externally like the G-Ki does (and some of the new FunFactory lines). This means that you just attach the charger to the two metal buttons, then plug the charger into the wall. (The book is VERY adamant about doing it in that order to avoid electrocution.) You just let it sit, and it will charge. While charging, the light will flash (so you know you made a good connection), and when it's fully charged, the light will stay on. I don't know how long this lasts; the instruction manual doesn't say. It didn't take long to charge the first time, and I've used it for at least an hour and a half without it dying.

You know what? I'm uber-surprised by the vibrations on the MiMi. I was expecting something buzzy and light. Instead? This thing is a powerhouse. For as small as it is, it's strong and definitely rumbly. The type of vibrations remind me of the Hitachi - not in strength, but in the type of rumbly vibrations. They are a lot stronger than I expected from the MiMi. Unfortunately, because the unit is so small, your hands will be near the strength of those vibrations as well. My fingers got numb pretty easily during use. The vibrations are very enjoyable; the numbness not so much. I'd say that, if you like rumbly vibrations but don't require Hitachi strength, this toy will easily be able to get you to orgasm. The lowest setting is relatively soft, but the highest is definitely strong.

Changing the vibration strength is pretty easy. The two buttons with which the toy charges through are also the way to change the vibration strength. One says "+" and the other says "-". You have to hold down the + to turn on the toy, and you have to hold down the - to turn it off. I will say that the buttons get annoying - and quickly. They are so close to flush with the surface of the toy that you really have to press down hard with your fingers to change the level of vibration. While this prevents you from accidentally changing the level, it also gets annoying really quickly if you enjoy changing your settings mid-use. It's also extremely annoying when you want to turn the toy off since then the toy is already vibrating, and it doesn't sit still as well and everything. If the buttons were easier to press down, I'd be a happier camper.

The MiMi has five steady vibration strength as well as five patterns. It's really easy to access the patterns. Once you've hit the strongest steady vibration, you just press "+" again, and you hit the patterns. This makes it really easy to hit the patterns, but if you enjoy ramping up your toy to "high" first thing, it also makes it really easy to overshoot your steady vibration setting. The lowest setting is pretty quiet; it can be heard in the same room but barely. The highest setting can easily be heard in the same room, and it would be audible through a closed door if someone was really trying to listen in. Music masks the noise pretty well though.
Experience
It works well during use. The vibration strength is exactly what I need, and it's very easy to press it up against the clitoris or use it up against the full vulva. It can be difficult to change the vibrations because the buttons are so flush, but it's possible. It also gets a little bit slippery to use once lubricant is applied, but it is still possible to hold it.

This can be submerged for cleaning, but don't leave it sitting in water to soak. Use warm water and antibacterial soap for cleaning, and this is only compatible with water-based lubricant. It can easily be stored in the original box, and JeJoue does not include a storage baggie. This can't be washed in the dishwasher nor boiled. I'm not sure about using bleach on it either. As such, I can't 100% testify to the stabilizability of it. It is small enough to shove into a condom though.

I like the MiMi. It's a strong clitoral vibrator that's easy to hold onto. It's waterproof for aqua-adventures, and it's easy to charge. I dislike the controls of the MiMi quite a bit, and if it had been changed, it'd be one of the best clitoral toys I own. If you like small toys and strong vibration, the MiMi is a great choice.
Follow-up commentary   I still like it 11 months after original review
I still like the MiMi, but I still want to see a darn update to the buttons on this thing! The buttons don't have enough "response" for me to really like/enjoy pressing them, and it drives me nuts. As far as clitoral vibrators go, though, it's definitely one of the strongest and rumbliest. I can't say to see the new Uma and other feature Je Joue toys if they are going to keep up that power.
This product was provided free of charge to the reviewer. This review is in compliance with the FTC guidelines.