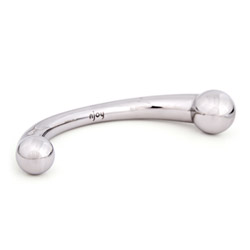 Different from the rest

This luxurious toy is not for beginners, but with practice it's possible to achieve a g-spot orgasm with it. It's deliciously heavy and made of a high quality material, but is more difficult to use than other g-spot toys.
Pros:
Made of medical grade steel. The small end is great for exploring the boundaries of your g-spot.
Cons:
Difficult to remove quickly, slippery when wet, requires practice.
Rating by reviewer:
3
extremely useful review
The title refers both to the fact that the Pure Wand is not like other g-spot toys, and to the fact that my experience with it was different than that reported by others.

I was eventually able to climax with it, but it didn't feel as at home on my g-spot as the Ella or the Clear Ribbed G-spot Wonder. Perhaps if I had tried the Pure Wand first and had my first successes with it, I would feel differently.

It arrived in a sturdy, impressive box. Inside was a foldout showing Njoy's other products. Nestled inside pink satin was the wand. Part of the satin was pulled back, exposing the Styrofoam underneath. It took a bit of adjustment to get the satin back where it was supposed to be. The box is too large to fit well in my toy box, so I don't use it. Instead I keep my Pure Wand inside a thick sock.

Once wet, the wand is harder to hold onto. I find that I constantly readjust my grip as I use it. I still don't have a set rhythm or technique. It took multiple sessions before I could establish a workable method to successfully achieve an orgasm.

It warms up remarkably fast during use and in fact will feel very warm after you remove it, more so than glass toys.

It’s nice that two ball sizes are together in the same toy, allowing you to easily switch between sizes. I continually change my mind about whether I prefer the small or large end. The large end gives more intense stimulation of the entire g-spot area. The small end will allow you to stimulate isolated parts of your g-spot, which can be very pleasurable. Using the small end, I can define exactly where my g-spot begins and ends.

Any lubricant is safe to use with this toy, but I find that it’s smooth enough that lubrication isn't necessary. Being completely non-porous, it’s easy to clean with soap and water and can be sterilized in boiling water or in the dishwasher.

Who would guess that this
kitchen cabinet handle
could be so much fun?
This product was provided at a discounted price in exchange for an unbiased review. This review is in compliance with the FTC guidelines.