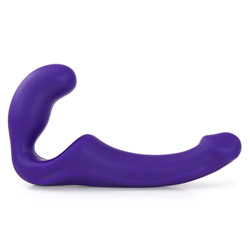 Pegging is great, though I have a hard time using in in a missionary position (if I'm on top) as I tend to spread my legs to get a better thrusting angle. If my partner is on his stomach with legs closed though, it really helps and the toy doesn't risk falling out. I've also tried using a harness with it, but I have found you lose a bit of insertion length that way, though that might not be an issue for you.
My personal favorite positions are cowgirl (with him on top of course, and Doggy style, as both give me the options to use my thighs to help hold the toy in if my concentration isn't where it needs to be lol

I would be mindful of gravity though, in situations where the couple involved isn't fluid bonded, I imagine condoms (both male and female) would help with this, but I would still be careful (especially if you're a squirter like I am), Might be better to stick to a more traditional strap-on if you want to reduce the potential for fluids to be swapped.

It's made of a semi firm silicone, though the middle portion is a tad floppy, but that was a plus for me, since, I am not a skinny lady, it always for some extra room if you need it. So I like that a lot, my feeldo is much firmer, and doesn't offer the same level of shape friendliness.

The texture is a matte silicone, so there is some catch if you don't lube up well, but thats an easy fix.

This toy is pretty awesome in my experience, though as I mentioned before, sometimes it does require more concentration then I would prefer to hold in place, however in those cases a simple position change is usually enough to fix the issue. And there is always the option of using it with a harness of some type.

The other thing I really loved is that this toy is very body shape friendly, it's flexible in the middle, and thats a huge pro for me, I'm not a small lady by any stretch of the imagination, I'm tall, have a prominent mons and prominent pubic bone. This toy will adjust to almost any shape, thats not something you can say about many toys these days.

As it's a fully silicone toy, soap and water is fine, or boiling, or the top rack of the dishwasher on sanitize. just don't take a brillo pad to it lol
This content is the opinion of the submitting contributor and is not endorsed by EdenFantasys.com