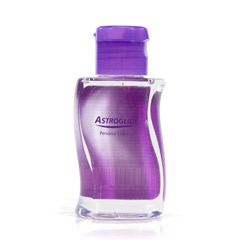 If it feels sticky and smells like glue, maybe you shouldn't put it in your mouth.

I am a very dissatisfied customer. Try as I did, I did not find it helpful at all. It only worked for a few minutes before getting that thick and sticky feeling. The constant reapplication will hinder anyone's orgasm. Your hubby's because he is constantly reapplying. Your's because you stop getting thrusts while he is making more lube happen. It sucked.
Pros:
*It is what it says. It lubes you up... for a little while. The bottle is appealing to the eye.
Cons:
Smell, taste, and constant reapplication
Rating by reviewer:
1
extremely useful review
When I purchased this lube, it was more for the price than the hype. It does come in a pretty cool looking bottle compared to the others on shelves. It has a swanky almost "S" shape to it, and honestly the 5 ounce bottle looks appealing. It is almost like it was saying "Here honey, try me". I don't like to spend much on lube. I would rather save my money for the toys themselves, but if you like anal play you need lube. So in purchasing it, I was thinking more about my bum than my naturally pretty moist vagina. When I got it home, I decided to play with it a little before rubbing it on my anus. I mean, you never know what might be added to the lube and what you might be allergic to. It was thick and very dense, after playing with it for something like 5-10 minutes, I noticed it becoming more sticky than slick. This worried me a little because when it comes to my anus, I would rather have something sliding in and out with a slick lube than getting stuck to those sensitive walls. I would need to keep the lube handy when using. While playing with it, I was a little put off by the odor. It was not a terrible smell, but it had a light smell that reminded me of glue. The taste test didn't go over well either. It is a terrible taste that is hard to get rid of. I even brushed my teeth and could still taste the bitterness.


When it came time to do the deed, I told my fellow about the lube. I told him to keep it handy if he wanted anal. Initially, it went over well. He slid in, and for the first few pumps all was well, and all felt well. Again, after maybe five minutes of thrusting, it grew tacky. He had to reapply to keep going. Every few minutes was the same thing. It was not much fun. He couldn't get off because he had to keep reapplying, and I couldn't get off because he had to keep pulling out to properly reapply. It was absolutely no fun!


When we got tired of trying, I refused to taste this nasty lube again, so I had to jerk him off. As you might know, this did nothing for me. The bottle even boasts it as a vaginal moisturizer. Even though my vagina was naturally pretty wet by this time, I tried to do myself with a toy while using Astroglide. Unfortunately, I had the same sticky situation. It is not quite "sticky", but there is no other word I can think of for this consistency. When I finally was able to finish, I had the substance in both my holes and felt gross. I really felt icky and had to shower. Even with soap and water, Astroglide wanted to stick to my skin. I'm not sure if this is the moisturizing feature. If it was, count me out on moisturizing my vagina. In the end, I used half the bottle. Ultimately, I would not purchase this product again. If anyone wants half a bottle of lube, I'd give it to you for free.
Experience
If you use this lube, NEVER TASTE IT! It will leave you with a thick coat of almost stickiness, so be ready for a shower. Also, be ready for many reapplications. On the other side, I bet it would be awesome for a short back rub.
Follow-up commentary   I still don't like it 2 days after original review
Everything should get a second chance right? That's what I personally believe anyway, and since I couldn't pawn my half bottle off to anyone, I need to use it, or I have wasted my money. When we tried it the second time around, alot of the same problems arose. We tried to use it vaginally, thinking my own secretions might help, and it did a bit, we had to keep reapplying but they were fewer and farther between. Every 10 minutes or so. We were able to finish, but again, I had the most goopy sticky situation between my legs. I felt I had to scrub to get it off.

I wouldn't recommend this to anyone.
This content is the opinion of the submitting contributor and is not endorsed by EdenFantasys.com

My Astroglide tags
About author