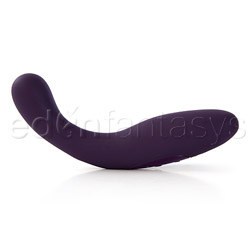 The biggest feature with the G-Ki is that it bends. Certainly, there are other toys out there that bend, but this one bends and then locks in place until it is released. That alone makes it pretty unique. This also helps it with its intended purpose – g-spot stimulation. Here’s where the goose reference comes from. If it works for the g-spot it works for the prostate, right? Well, some toys can pull it off and some can’t. When reaching for the prostate, the G-Ki does not disappoint. Being able to adjust the curve allows for the desired amount of prostate simulation. Not losing the bend is definitely a key piece of the puzzle. Unfortunately, the bend might not be quite enough for some, and the g-spot contact might ultimately be a little lacking. The ability for additional curve and/or a little more vibration would help the G-Ki make more g-spots sing. It really is almost there.

Je Joue’s G-Ki is covered in smooth, pure silicone with a matte appearance. The purple coloring is very attractive and it feels supple like a toy in this price range should. The silicone is unbroken until it comes to the control pad with is shiny plastic with the two metal buttons that adjust the vibration and serve as recharging posts. These buttons have to be pressed pretty hard to operate the G-Ki especially when first turning it on. This keeps it from accidentally turning itself on during storage which is good. The silicone is able to stretch adequately at the curve adjustment points so that it doesn’t appear to be stretching or in danger of breaking at these points. From the sounds made during curve adjustment, there is definitely some metal (besides the vibrator) in the interior spine of the toy that help the G-Ki retain the curve.

The G-Ki has two different pivot points for the curve. The main one is close to the middle of the toy and allows for a few positions for the main curve. The second pivot point is closer to the insertion end of the G-Ki and really allows for three positions for the tip. This combination allows for quite a bit of variation to give most people what they are looking for. Recharging using the buttons is pretty amazing and seems to work well. The G-Ki recharges quickly (took less than an hour) and seems to last a couple of hours during use. The fact that it is waterproof in addition to all these other features is pretty amazing.

G-Ki’s size at 1 ½ inch diameter is suitable for most. It might not be big enough for some size kings and queens, but it isn’t too small either. There is very little size variation throughout the toy, so it wouldn’t necessarily be difficult to push it too far in when it is less curved, but the instructions advise against that explicitly.

The performance of the G-Ki can be pretty amazing. The ability of it to bend and lock gives it potential possibilities that are extremely rare. It gets to the prostate and gives enough stimulation to satisfy most users. It reaches in and contacts the g-spot as well, but might not satisfy those looking for the strongest g-spot pressure. It can be used hands free in some cases and in the most extreme curve can contact both the g-spot and the clitoris. This can be tricky though as getting it to do both adequately is very difficult and seems to be where the curve is not quite enough.

Since the exterior of the G-Ki is almost all non-porous 100% silicone, it can be sterilized by wiping it with a 10% bleach solution to allow for sharing or for indulging in anal play without a condom. The electronic internals preclude it from being boiled or thrown in the dish washer, but at least there is one way to know it’s getting absolutely clean. The day to day cleaning with soap and hot water will remove any stray lubricant or bodily fluids and keep the G-Ki looking nice. Speaking of lubricants, as with any toy containing silicone, it is best to avoid lubricants that contain silicone as they may bond with the surface of the toy causing it to degrade and who would want to do that to a toy as pretty as the G-Ki?

The G-Ki is a premium toy, and the packaging reflects that. There are some nice pictures of the G-Ki on the exterior box and within is a stronger satin lined black box with the brand name on it that is tied closed with a satin ribbon. The G-Ki is found nestled in the shaped form within. Je Joue does not provide a pouch for long term storage, which would be nice, but the packaging definitely indicates quality.

Okay, so this review title needs some more explanation. Recently, on discussing the merits of Disneyland I told a friend that the reason Disneyland is such a great place to go is because it may not be perfect, but they have things there that you just won’t get anywhere else. How does this relate to the G-Ki? Well, the G-Ki may not be perfect, but it has some things you just won’t get anywhere else.

We used the G-Ki together on both of us and my partner also used it solo. I felt that it really did good things to my prostate and I had an orgasm in short order as she moved the vibrating G-Ki within me and gave my penis some oral attention. For her, both with me and by herself, she found it a lacking in the curve, vibration and girth departments. It probably doesn’t need to be increased in all three areas to be more successful, but if one or two of them improved it would probably help her satisfaction. The locking curve is pretty amazing and if it just had a little bit more curve to it, she would probably be satisfied.
This product was provided free of charge to the reviewer. This review is in compliance with the FTC guidelines.