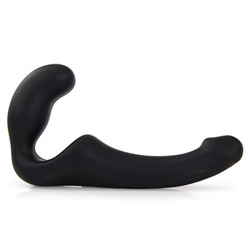 Let's take those in the Feeldoe series first. The Feeldoes generally have a nice design, but upon examining it further, I felt it was too "rubbery". Even though it is made of the same silicone material as the Share, the Feeldoe was too flexible - in the sense that you could bend the shaft in a 90 to 110 degree angle. If it could do that, in my opinion, it was not firm enough.