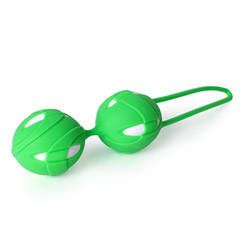 Fun Factory made a good move changing from Elastomed to Silicone, but the design on the removal end still needs work. Even with that, Teneo Duo is great for working Kegel muscles and it's pros out weighs its cons.
Pros
Color selection
Silicone
Works Kegels
Cons
Removal loop is way too long
Rating by reviewer:
4
extremely useful review
You've seen the Radioactive Pumpkin of Awesomeness, you've seen the Nuclear Kumquat of Mostly OK, now meet the Fluorescent Limes of Mediocrity!

First things first. Let's talk about the packaging. Honestly, I usually love Fun Factory's packaging. It's cute and fun without going crazy with glitter and hearts. It's not discreet, but it still retains a sense of class. You won't see naked porn stars or sorority girls in their underwear on the box in an attempt to sell it. In the case of Teneo Duo, the packaging consists of an outer pink sleeve with some general information. Inside the sleeve is a box that is...what's a color between silver and copper?...Well, that's what color it is. Inside that box is the Duo and some vague instructions. 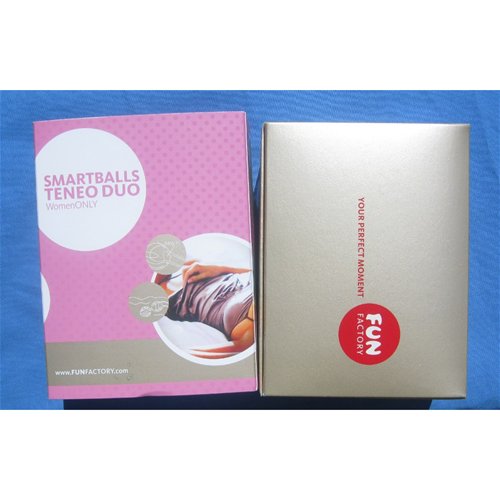 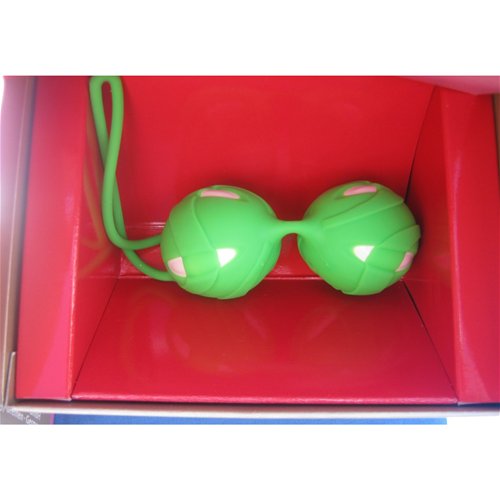 The Duo weighs .3 lbs. By my measurements it is 4.75 inches around each ball with a half inch "neck" in between, and has a removal loop that extends 3.5 inches past the end. The total length, from the leading ball to the end of the loop is about 7.25 inches. That is pretty dang long. The length of the balls is just fine, but that extra long loop on the end hangs down between my labia just annoys me. I would love to see the loop shortened to no more than one inch. It lost an entire star for me here, and I contemplated taking off 2. 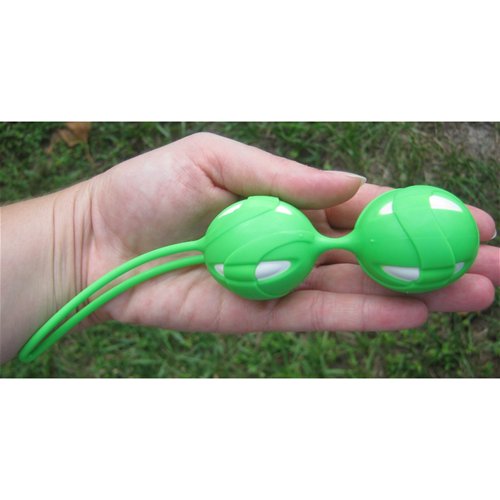 The Teneo Duo is made of silicone, so only water based lubricant can be used with it and it should be kept away from other silicone toys. It's completely waterproof (of course), and can be cleaned with just soap and water. I like to use a clean toothbrush to scrub around the grooves.

These exercisers are easy to use. Just pop them into your vagina, non-loop end first. On the loop end of the Duo, there is a finger depression meant to make insertion easier. Honestly, I find the additional indent neither here nor there.

I have to say that the balls work marvelously well. They are just the right size and weight for me in that I have to work my Kegels to keep them in place, but I don't have to struggle to do so. I do notice that when I've been wearing them, my orgasms are stronger, and that's always a plus! 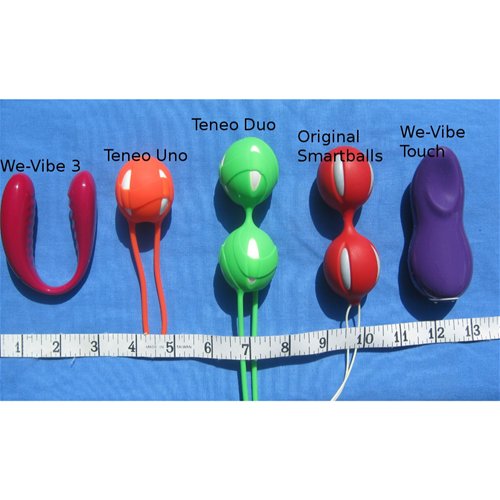 The original Smartballs and the Teneo Duo are roughly the same size, shape, and weight, and more importantly, they both work as intended. There were two key changes: material and design of the loop end.

The original Smartballs were made of Elastomed, an 8 on the Eden safety scale. The new Teneo Duo is made of silicone, which is a 10 on the safety scale. This very preferable upgrade is the only reason I gave it four stars instead of 3.

The shape of the end between the two is radically different. On the original Smartballs, the end with the removal string ended in a nub that pinched me when it moved. The string itself was nice and floppy, so it could easily be tucked out of the way. On the new Duo, the end has a finger depression, instead of a nub, which does not pinch. The removal loop, however, is more stiff than the string of the original. Even though it is flexible, it is not as easily moved out of the way as the string of the old style. 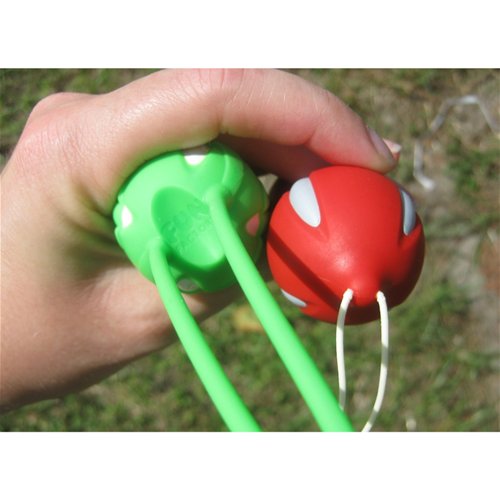 In addition to the two big changes, there are two smaller things I feel I have to note. For one, the original Smartballs only had vertical stripes, while the Duo has vertical stripes and raised waves that go around the balls. Also, the neck of the old style was flexible, but retained it's shape unless you tried to bend it. The new neck is very floppy and will bend under just the weight of the balls. I don't feel either of these changes really affect the use, but it is something to note. 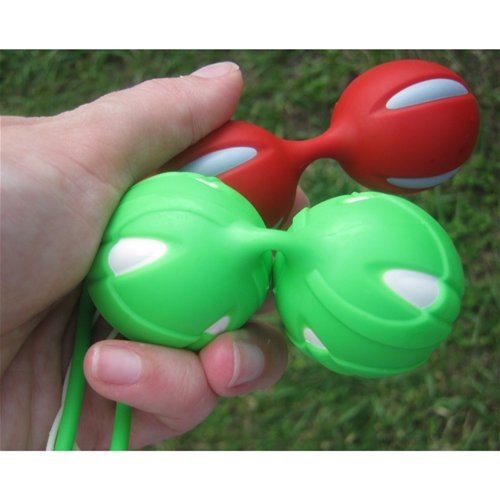 In short, I feel the change from Elastomed to silicone is fantastic, but the change on the end, though different, is no better than the original style. The minor changes to the neck and wave design don't seem to affect use. 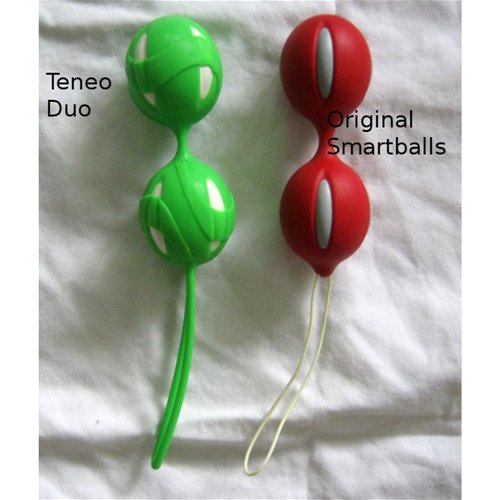 Follow-up commentary   I still like it 7 months after original review
I still like the Teneo Duo, but not quite as much as some other Kegel balls I've tried. The Duo is pretty good, but it is ever so slightly too long to be perfect, but fist well enough that I can't really say that I don't like it. I prefer the Uno and Je Joue's Ami, but not by much.
This product was provided at a discounted price in exchange for an unbiased review. This review is in compliance with the FTC guidelines.

Become a Reviewer
My Smartballs Teneo duo tags
About author