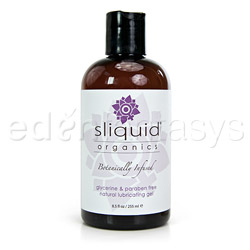 Sliquid Organics: Gel lubricant is a thick, completely natural, long-lasting lubricant that enhances both internal and external play. As someone who loves all-natural products without any strange or unidentified ingredients, Sliquid Organics has proved to be a great company for their lubricants. I've found that the gel lubricant works well both anally and vaginally, so long as the person doesn't have an allergy to any of the ingredients. While I believe that it is safe to ingest, I would not recommend swallowing too much of it; it can become a little bitter.

Since it's water-based, it can be used with every toy material safely without harming the toy in any way. This makes the lubricant extremely versatile and a staple in my toy box.

As its name implies, Sliquid Organics: Gel is incredibly thick. I'm not too experienced with tons of different lubricant companies, but in comparison to the five or six others that I've tried, it is certainly the thickest and least greasy and sticky. When poured from its bottle, it does drip and slide if left alone for about ten seconds, but it doesn't drip so much that it cannot be spread over the desired area. During use, it keeps internals sufficiently lubricated throughout play. Vaginally, it may need to be reapplied once or twice if there's a lot of rough play involved, and it's about the same anally, depending on how much friction there is.

Thankfully, it leaves no sticky residue or greasiness behind, so it can be reapplied as much as needed during play without becoming uncomfortable or tacky.

While the lubricant has a very light and pleasant scent, the taste is rather bitter and almost soap-like. This could be due to the fact that one of the ingredients is aloe. That being said, the scent is not something that becomes obtrusive during play; it is hardly noticeable. I have also not gotten sick from the times that I have swallowed Sliquid Organics: Gel, so I would say that it's safe to swallow so long as the person is not allergic to the ingredients. Even so, I don't recommend swallowing too much due to its soap-like taste.

Even though other reviewers have not had as great of experiences with Sliquid Organics: Gel, I have found that it's an incredibly natural, slick, and thick lubricant. It's long-lasting, so it doesn't need to be reapplied often meaning that, long-term, it costs less. It also spreads incredibly easily and creates a gooey, yet natural coating wherever it's applied.

What I like most about Sliquid Organics: Gel is that it's so incredibly natural feeling that cleanup is minimal, if at all. It doesn't require that annoying scrubbing and doesn't give that icky feeling that other lubricants leave behind; instead, it absorbs into the skin in such a way that all cleanup is as if there had been no lubricant used at all.

The only thing that's I truly dislike about the lubricant is that it isn't a great-tasting lubricant. This makes it not the best choice if you like to lick or taste your partner once you've already applied lubricant.

There wasn't any packaging for the lubricant other than a tied plastic baggie. The lubricant itself comes in a plastic bottle with a flip-top cap. The cap can be unscrewed, but this releases way too much of the lubricant. Once the lubricant's all used up, the bottle can be recycled.

Sliquid organics silk
$21.59
Follow-up commentary   I still like it 5 months after original review
This is the main lubricant that I use for, well, just about everything. It has easily become my absolute favorite, and no other lubricant that I've tried (I had an experimentation phase, what can I say?) has come close to the perfection that is Sliquid Organics Gel. Others may prefer different brands, but this is still definitely the lubricant for me.
This product was provided at a discounted price in exchange for an unbiased review. This review is in compliance with the FTC guidelines.

Reviewed by Sir (Eden Writer) Love was made for me and you.
Rank
6.8
wrote 141 reviews
Comments
Make a post
Forum
Thank you for viewing Sliquid organics gel – lubricant review page!
Top