A Peak Behind the Female Dominated Future or, My Time as a Man in the Eden Forums. 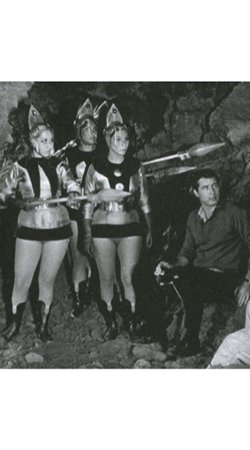 [italic|Planet of Female Invaders 1967]Estudios' Amer'ica
For the first time in recorded history, women out number men. Roughly about 51 to 49 percent. Current trends suggest this number will actually continue to grow over time expecting to reach about 60/40 in 2060. As an amateur sociologist I'm curious to study the land scape of the future and the Eden Forums seem to have let me do that. These are my journeys.

"“The great question that has never been answered and which I have not yet been able to answer, despite my 30 years of research into the feminine soul, is: ‘What does a woman want?’”"

According to the US Census Bureau, as of 2002 women outnumber men 51 to 49 percent in the USA. In the 2012 Olympics just held in London, the US Olympic team had more female athletes than male ones. That’s right: out of 530 athletes 269 were female, and 261 were male. This year’s Olympic Games were also the first time women competed in every sport.

More women graduate college a year than men and more women are middle managers in companies than their male counter parts. Saudi Arabia is even building a whole city to be run, staffed, and operated completely by women. Some population scientists are expecting women to outnumber men 60 to 40 percent in 2060. And while I don’t have official number on this, if I were to hazard a guess, I would think that the EdenFantasys forums are probably about 90 percent female.

Sorry, fellow owners of the old trouser trout, our time as top dog is coming to an end. The EdenFantasys Forums provide an interesting research ground for this mature sociologist. I’d like to share with you four things I’ve learned about the future dominated by women. So, come with me on a journey to the near future where the world is run by women and what we males can expect life will be like then. These are the four things males can expect in this surprisingly bright looking future.

Number 2:
Some women on the internet will immediately fawn over a man simply because he has taken a spot on the internet, which would normally be filled by a woman. Slightly nerdy male internet celebrities will be born. These men will be slightly attractive but not too much, relatable and obtainable to their fan bases. These men will love discussing sex toys and relationship advice, they will understand “nerdy” girl things and they will get famous for this. Women not into these subjects will call these men attention mongers and other mean things. These women will be right however; as these men will begin instantly selling out and doing anything they can make money from that slightly fits their fan base.

Number 3:
Grammar Nazis will cease to exist as women never seem to point out each other’s spelling errors. Men will however be destroyed for making even the smallest typo if their statement slightly disagrees with a woman’s previous statement. There will be a female version of trolling on the internet. However, for the life of me I have not figured it out yet; I’ve witnessed it for certain, but I’m not certain the intent of the game, no matter the rule of not feeding trolls still applies in the female dominated future.

Number 4:
Women of the future will be really open about sex. They will willingly discuss it with anyone; they will openly discuss how much they have and how much more they would like to be having. They will tell men exactly what they want. For men of the future, at least on the sex front, women will actually be an open book. Future men likely still won’t understand anything else about women, but if they don’t understand the sex part, it’s future man’s own damn fault. Future man should have no problems figuring out how to get with a woman since will be at least 10 percent of future females without men. Gays and Lesbians would be almost negating one another, making those seeking an opposite-sex partner equal in numbers. Future women being so open and honest about sex will hopefully end the “but I was such a nice guy” argument. Everyone will stop hearing people whining about the “friend zone”. Instead, we will hear jerks saying, “Man she only dates nice guys.” But, honestly, who cares about those guys anyways?

So honestly guys, there is no reason to fear being the under dogs. From my brief study of the world of a female dominated landscape, things seem to be pretty much the same as always, only girls are much freer about sex when guys aren’t telling them they are not supposed to be having it. There hasn’t been any talk of the secret “neuter all the men” plot we seem to fear and they haven’t been secretly plotting a scientific way to replace us. Most women seem to be just as confused about us as we are of them.
Tags:
Views: 2048
Related articles