3rd Anniversary: You can't do it without one of these! 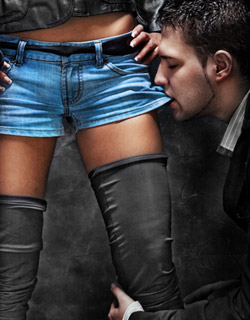 In honor of our third anniversary, we thought we’d dredge up some of our awesome past. We’ve got so many posts in our archive that meant so much to us – and we hope to you! – and shouldn’t be forgotten. So over the next couple weeks, we’ll be sharing some excerpts with you.
Over the years, we’ve talked about a lot, here at SexIs, and pretty much all of it falls under the heading of “sex.” It’s what we love and what we do.

We’ve all got one of these body parts and they’re often used for sex. So of course when we’re talking about sex, we’re gonna talk about these. A lot! Here's what some of our writers had to say about our various parts.

Around the adult corner of the worldwide web, we talk a lot about vaginas. Your pussy’s shape, smell, care, hair (or lack thereof) and even what you call it are all open for discussion by every Tom, Dick and Sheila on the web whether they know you or not.

Worry not, fair maiden! We’ve had Vagina Warriors aplenty in our three years! They know you’ve been picked on and put down. They’re tired of hearing the fish jokes, too! So, here’s what some of them have to say on the subject of our lady parts.

Since our good friends in the scientific community are still hesitant to admit to the g-spot’s existence (most likely because there’s money to be made in the science of denial), there’s no exact consensus as to where it’s located. But generally speaking, it’s located between one-third and one-half of the way between the vaginal opening and the cervix. Trust us, though – it’s well worth your time to go looking for it. Just like the clitoris, the g-spot is another BFF in wait of your gentle ministrations. In many cases, it may feel somewhat spongy.

Keep in mind however that like penises, all female genitals are different. We’d compare them to fingerprints, but fingerprints are grimy business. So let’s draw the analogical line in the sand at snowflakes. They’re pretty, and no two are alike. As such, not every woman has pronounced g-spot – it’s there, it’s just not as easy to find. Also, not every woman is as Gspottishly sensitive as some may be. Everybody’s different. Which just makes each sexual adventure all the more fun – Gspottery is a lot like pottery: every glancing touch brings with it something … new.

Some scientists now think the Gspot and the internal clitoris are one in the same. Tomato, to-mah-to. All we know is there’s something there and it feels good! (Here’s the second part to that series if you’re interested.)

We mentioned fish jokes. What about that smell everyone seems to have so much trouble describing? Erin O'Riordan has a lot to say about it Fish Tales.

Chicken soup with a load of pennies in it
Mango pork
Salty milk with coins in it
Somewhat salty and alkaline, like licking a big fleshy battery

After reading up on plastic surgery on the vagina, The Bloggess told us:

Here’s the low-down though, just in case you happened to find this page while searching for “What kind of vagina should I ask my surgeon for?” First off, I want you to stab whoever it was that made you think you needed cosmetic surgery on your stimulus package. Secondly, no. There is not a straight man alive who decided to not have sex with a woman because her vagina “just wasn’t pretty enough.” These are the same men who happily refer to your lady parts as a “penis fly trap.” They’re not that picky, and honestly? They’re not looking all that hard.

If you do decide to get a vaginostomy because it will make you feel more confident and it’s a decision you’re making strictly for yourself, then more power to you. Make it bigger. Make it smaller. Add a laser and a margarita dispenser. Go wild. But if you’re considering having painful and dangerous surgery simply to fulfill the imaginary expectations of a society fixated on making everyone in the world look like a Barbie (from head to vulva) then maybe do a little soul-searching first. Your vagina is awesome, and don’t let anyone tell you any different.

Now if you'll excuse me, I'm going to shave my pubic hair into a giant middle finger.

“You know what they say about men with big feet!”

“They have big feet.”

Men aren’t strangers to genitalia insecurities. One of the most-played club songs in 1994 was “Short Dick Man” by 20 Fingers. All races and nationalities have their penis stereotypes. And we've even classified erectile “dysfunction” as an illness requiring treatment by little blue pills – provided your heart can handle it.

On the subject of masculinity and penile relations, Bob Modern had this to say:

Even today, when we men are encouraged, seemingly mandated, to embrace sensitivity and nurture our feminine sides, the penis defines in large part what it means to be a man. It defines our masculinity biologically. Our psychological make-up is as much nature as nurture, and nature equipped us with the bait-and-tackle package that supplies those delightful hormones which fuel us with aggression, assertiveness, and bravado—qualities which have been regarded as inherently male for millennia.

Now we're caught between our dick-bestowed inclination toward swagger and the anxieties that go along with owning this equipment. On the physical side, there's no better primal terror for men than performance anxiety. In the social arena, we can't talk honestly about the penis, except to exploit it for a cheap laugh in sex farces or to discuss fears of impotence, thus revealing our vulnerable side, a most laudable activity in a PC society. How did our dicks and masculinity become so devalued? Where do we go from here? Let's try to answer those and present a couple of modest proposals to allow the penis to stand proud again.

Award Winning Erotica Author Rachel Kramer Bussel had excellent advice about male insecurity. Not the least of which being that men should take responsibility of it (just as women should of theirs).

I’ve never whipped out a measuring tape in bed so I can’t give you precise numbers, but I think I can safely say I’ve slept with men with penises ranging from very small to gigantic. Most have been somewhere between those two extremes and the big lesson I’ve come away with is: size is not what makes someone good in bed, not by a long shot.

My suspicion is that men with smaller penises tend to be much more self-conscious about it than their lovers, male or female, are. Some guys turn it into a joke, such as Stephen “Steve-O” Glover of Jackass fame, who writes in his memoir Professional Idiot that he has “I Have a Small Weiner” (unintentional typo and all) tattooed on him. Now that’s ballsy and dare I say, kind of hot in a badass, honest way.

And no grouping of penis quotes would be complete without an article about a Penis Festival. We're not kidding. It exists. Bella Bell told us all about it back in ‘10.

Every March 15th, the residents of Komaki, a small town near Nagoya, Japan, host the Hounen Matsuri. Known by foreigners as the Penis Festival, it is one of the many Japanese phenomena that defy Western comprehension. It’s easy to see how the message of the festival could be unintentionally distorted. On the surface, it seems like an excuse for old Japanese guys to fill themselves with cheap beer and chase girls around with bananas. Also, the predominance of the phallus throughout the shrine’s decor is startling to say the least. Honestly, if you simply stumbled into this scene without hearing the history of the event, it would all seem quite surreal. However, the fact of the matter is that this is a fertility festival and is taken quite seriously by most Japanese people. It’s about ensuring a bountiful harvest and healthy offspring.

It’s not about the penises. It’s more of a love story.

We know you’ve got a favorite genitals post from our archive. How could you not? There are so many good ones! Drop us a line in comments and tell us which ones stuck with you most.

And don’t forget! To celebrate our third publishing anniversary, we’re taking 25% off your purchase when you use the code 3YRSEXIS till March 19th! You’re welcome! Thank YOU for being such a great audience.
Tags:
Views: 1377