I would actually recommend the Basic Vibrating Bullet over this one simply because of the price, however if you need patterned vibrations then this maybe a better choice for you.
Pros:
10 intensities
5 functions
Cons:
Accidental power ons
Loud and rattles under pressure
Rating by reviewer:
3
extremely useful review 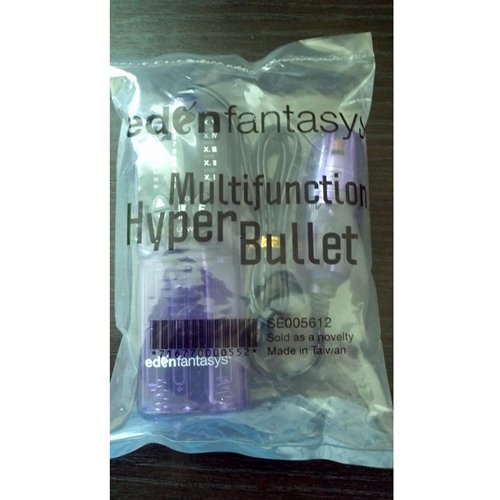 The Impulse Multifunction Hyper Bullet comes in Eden Fantasys plastic bag packaging. Inside you'll find the bullet and attached remote. The bullet and remote are made of hard see through purple tinted plastic. They are connected with a black wire. The flexible wire is about 30 inches long.

The bullet and remote are powered with 3 AAA batteries that are not included. The batteries are inserted into the remote. The back slides off to reveal the battery compartment. Inside the compartment are pictures indicating the correct battery direction. The back slides back on easily after the batteries are inserted and it clicks in place. The front of the remote has the Eden Fantasys logo on the bottom in white and features raised lines for better thumb grip. There are 3 buttons. 2 buttons control the speed or intensity of the vibrations with an up and a down arrow. There is also a function button labeled simply F and switches between the 5 different functions. The function settings are constant vibration, escalating up/down down/up, escalating up, variable pulsing, and a semi fast pulsing. There is no off button, you must hit the down arrow until it turns off. My major issue with this toy is with the controls. It's entirely too easy to turn the toy on. Just putting it in my drawer it accidentally turns on. I've experienced the accidental turn on many times. If you want to travel with this toy I recommend removing the batteries first. It also wouldn't hurt to remove the batteries while storing either. The remote measures about 4 1/2 inches total and it's about 3/4 inch thick. The bullet is about 2 1/4 inches long and at it's widest point in the middle has about 1 inch diameter. In the pictures below I've compared it's size to the Multispeed Basic Vibrating Bullet. 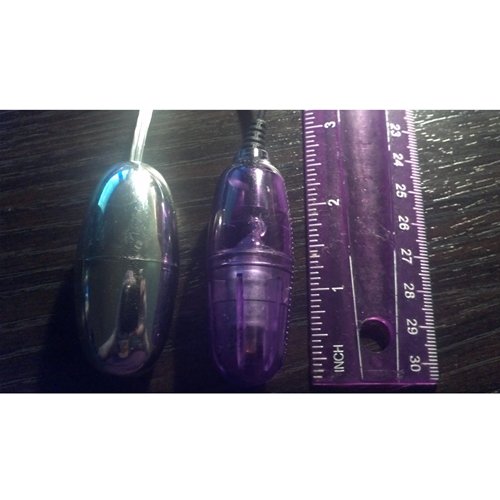 You'll notice that in the pictures above that the remotes are about the same size while the bullets themselves are slightly different. The Basic Vibrating Bullet is shorter and wider, where as the Hyper Bullet is longer and thinner. The bullet is see through plastic with a noticeable seam around the middle. I like how you can see the motor spinning when you turn it on through the plastic. The motor features 10 vibration speeds and honestly I think the Basic Vibrating Bullet is slightly stronger. The Basic Vibrating Bullet is slightly heavier, that might add to the stronger perception. Because the toy is made of plastic it doesn't smell or taste of anything. It's also extremely easy to clean with just soap and warm water or toy wipes if you prefer. If you plan on sharing then please be safe and use a toy cover. Any kind of lubricant can be used with this toy because it's made of plastic.
Experience
I like to use bullets on my clitoris by applying pressure, when I applied pressure to this bullet it became loud and began to rattle. It seems to have very 'buzzy' vibrations on high. I actually prefer the cheaper Basic Vibrating Bullet over this one.
Follow-up commentary   I still don't like it 4 months after original review
This is a decent bullet vibrator. I do find it a little expensive and therefore would recommend other bullet style vibrators over it. It is somewhat powerful, but I really didn't like the sensitivity of the buttons or the seam around the bullet itself and the loud rattling.
This content is the opinion of the submitting contributor and is not endorsed by EdenFantasys.com