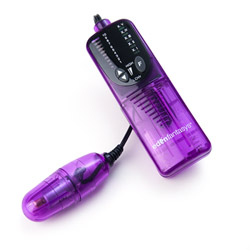 It's Called a "Hyper Bullet" For a Reason!

This is one of my favorite free gifts ever! The fact that it has 10 vibration speeds and 5 pulse patterns makes it great for almost anyone. I love it!
Pros:
Lots of variety
Powerful
Doesn't drain batteries fast
Cons:
May be too strong/weak for some, though this may be a rare instance, since it has 10 speeds
Rating by reviewer:
5
extremely useful review

This is one of my favorite free gifts ever! The Impulse Multi-function Hyper Bullet is one of the most versatile bullets I've come across thus far, with 10 speeds varying from very low to EXTREMELY high, and 5 different pulsation patterns that are 100% adjustable. This bullet is, of course, made for clitoral stimulation, but you can use it on all your erogenous zones! Just be sure to NEVER insert it vaginally or anally. The cord could snap and set you up for an interesting doctor visit! It's a bit on the louder side of sex toys, so I wouldn't advise my fellow college students to be using this with a roommate in the same room, but you may still get away with using in a separate room with the TV or music on. As for travel - the buttons on the remote are extremely sensitive, so if you want to take this with you, be sure that the batteries are packed separate. You don't want this baby going in your suitcase!

This bullet is made of a food-grade plastic that is hypo-allergenic and latex/phthalate free. This material ranks in with an 8 out of 10 on the EF Material Safety Chart and completely non-porous. Now, this does not mean you don't have to clean it! It has absolutely no scent to it, and the plastic is smooth to the touch. There is, however, a VERY noticeable seam in the bullet itself, but this should not be felt during use.

The design is very simple and standard for a bullet. What makes it a bit different from other bullets is the LED display that shows exactly what it's doing. The bullet itself measures about 3 inches in length with 3 inches in circumference, which may be pretty big for some. The remote is about 5 and a half inches long and 2 inches across, and the wire is about 36 inches long. The wire is a very thick cable similar to the cable of most household items, (Like a lamp, not a refrigerator.) which makes it a much more durable wire compared to other bullets. Because of the ability to change the speed from very low to very high, this toy is great for beginners and the more advanced alike, which is hard to come by with toys these days. This toy isn't exactly discreet, so I wouldn't leave it out in the open.

This is extremely simple to operate: Just press the up arrow on the speed to turn it on and raise the speed option, the F button to change patterns, and the down arrow to lower the speed and turn it off. The buttons are very sensitive, it barely takes a tap to get them going! The speed measures in from about 2 vrooms at its lowest setting and a whopping 5 vrooms at its highest. As for sound level, it gets as loud as 3 bees at its highest, so as I mentioned earlier, I wouldn't recommend using it with someone else in the room, but you shouldn't have any problems in a separate room with music or a TV going.

Now, here's my best attempt at describing the pulse patterns (This is the exact way they are presented on the remote):
X. I - steady vibration
X. II - roller coaster; steady rise and fall
X. III - upward escalation
X. IV - this one I can only describe as a drum march. (Bzz. Bzz. Bzzzzzz. Bzz. Bzz. Bzzzzzz. etc)
X. V - steady pulsations

As I mentioned earlier, these patterns can all be adjusted with the vibration intensity you prefer. If you are wondering, the vibrations are located at the tip of the bullet, but can be felt all throughout its length, and the battery life is exceptional! With frequent use for 2 weeks now, it's still going on the same first set of batteries, which is something that doesn't usually happen with a toy so strong.

The maintenance of this toy is just as simple as operating it. When you are finished having fun, just wash with a little bit of antibacterial soap and water or your favorite toy cleaner. You can store this anywhere, just be sure to take the batteries out, or at least check every so often to prevent any battery acid leaks. Since it is plastic, you can use any lubricant type you like!
This content is the opinion of the submitting contributor and is not endorsed by EdenFantasys.com