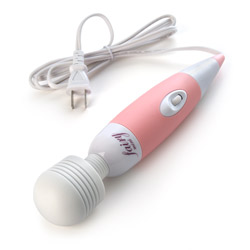 I might have bought a defective toy but for me the value was just not there. If I got another one and it lasted longer, I would definitely reconsider but I like my vibrators to be reliable.
Pros:
Quiet, powerful, gradual power ring
Cons:
Broke after 3 months, short power cord, pink doesn't go with everything
Rating by reviewer:
3
somewhat useful review
I bought the Fairy Mini Wand massager after a friend raved about how great this toy was. I must admit, after my Hitachi Magic Wand was missing, I was a little bit skeptical about trying something new but perhaps this new toy would turn out to be the perfect rebound to get over my former flame. After all, this new one was sexier, faster and stronger. I did love the way this toy gave me the option to gradually increase the power and the scroll wheel was easy to use. It also made my Magic Wand feel outdated and lacking in power and stamina.

I brought home my pretty pink Fairy, lit up some candles, took it out of its box and...began to look for my extension cord. The cord was so short it wouldn't reach my bed. I finally got myself set up and though the lower speeds didn't do too much for me, once I dialed up the power I reached unexpected new highs. Though the machine was so powerful, it was also very quiet and lighter than the Magic Wand. So far, it was a match made in heaven (if your version of heaven is inside a brightly lit sex store of course).

I thought I had found a new long term plaything but before the honeymoon stage could even end, the toy broke. I was so disappointed. I used it for three months with nothing out of the ordinary and it completely broke down. I even had a connection of mine who is an engineer take a look at it but nothing could be done; the toy was definitely out of commission. It still turns on but the head has completely lost its vibrating power, scrolling up the wheel does nothing and all I get is a low level hum coming from the toy.

Like most fairy tales, this one was short lived and I found myself alone at the stroke of midnight without so much as a fairy godmother in sight.
This content is the opinion of the submitting contributor and is not endorsed by EdenFantasys.com